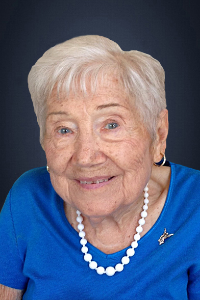 CHICOPEE ~ Barbara F. (Zientara) Adams Skowron, 93, a longtime resident of the Fairview section of Chicopee, was Called Safely Home on Tuesday, January 14, 2020. She passed into Eternal Life at Holyoke Medical Center in Holyoke surrounded by the care and comfort of her loving family. She was born in Wierzchoslawice, Poland on June 16, 1926, a beloved daughter of the late Ludwig and Stanislawa (Rzekanowska) Zientara. She was a Nazi Holocaust survivor and, following World War II, worked for the American Red Cross. She longed to return to her village where she was separated from her four brothers and her sister, not knowing if they survived and was encouraged to leave her beloved Poland and start a new life in America. She was sponsored by the Atherton family in Southern Pines, NC where she lived but longed to return to her Polish roots. Due to the city’s strong Polish community, she moved to Chicopee. She later lived in South Hadley and East Springfield and returned to Chicopee in 1988 where she lived the remainder of her life. She was the manager of the Fanny Farmer Candy Shop at the Fairfield Mall in Chicopee where she worked until the age of 70 and the closing of the mall. Active in her Catholic faith, she was a communicant of Saint Anne Church in Chicopee where she served as a Eucharistic Minister, a Senior Altar Server and was a member of the Saint Anne Sodality Guild. She also volunteered for many years in the Saint Anne Confraternity of Christian Doctrine Program for which she received the Pope Pius X Award. Above all, Barbara was a remarkable woman who loved spending time with her family and her many friends. She was predeceased by her husbands, John Adams and Stanley Skowron; and her cherished great-granddaughter, Nora Adams. She leaves her two loving children, Robert J. Adams and his wife, Karen, and Linda A. Duggan and her husband, Gary, all of South Hadley; her three cherished grandchildren, William Adams and Brandon Adams and his wife, Amanda, all of South Hadley and Kelsey Duggan of Alexandria, VA; her cherished great-granddaughter, Brynn Adams; and her many extended family members and friends. Her funeral will be held on Tuesday, January 21, 2020 beginning at the St. Pierre – Phaneuf Fairview Chapels, (413-533-3307), 506 Britton Street, Chicopee, MA 01020, (funeral home will open at 9 a.m.), followed by a Mass of Christian Burial at 11 a.m. in Saint Anne Church, 30 College Street, Chicopee, MA 01020. Her burial will follow the Mass at Mater Dolorosa Cemetery, 152 Pittroff Avenue, South Hadley, MA 01075. Her family will receive friends at the funeral home on Tuesday, January 21, 2020 from 9 a.m. to 10 a.m. prior to the Mass. The parking lot is located in the rear of the funeral home. For those who prefer, her family requests that memorial donations be made in her memory to Saint Anne Church, 30 College Street, Chicopee, MA 01020. For more details, please visit:
www.stpierrephaneuf.com