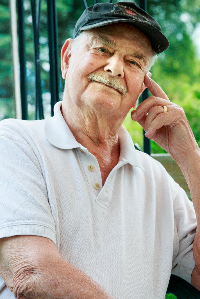 Sanbornton-----John Tracy Wilson, longtime resident of Sanbornton NH, passed away unexpectedly at the age of 99, Monday, January 13, 2020 at Lakes Region General Hospital from complications after a fall.

John was born September 7, 1920, in Grand-View-on-Hudson, NY. After training as a pilot in PA, he enlisted as a pilot in the Army Air Corps and continued advanced pilot training at No 1 British Flying Training School in TX where he earned his AAC & RAF wings. He spent most of WWII based in India bombs and gasoline over the Himalayas to the allied forces in China, service for which he was presented the Air Medal and the Distinguished Flying Cross.

After the war, he returned to Nyack, New York, where he worked as a regional sales rep for Texaco. In 1952, he became an airline pilot for Eastern Air Lines, and flew for EAL until his retirement in 1980. During his time at EAL, he served as chief accident investigator for the Eastern Airlines Airline Pilots Association.

After leaving EAL, he teamed up with Emerson Aviation to provide aerial banner advertising in the Lakes Region for several years. In 1990, he became a “house husband” when his wife returned to work, during which time he cared for his two youngest children, as well as continued his love of flying through his activities with the Civil Air Patrol, the United Flying Octogenarians, and work promoting flight safety.

John leaves behind his wife of 44 years, Catherine; his daughter, Tracy of Boise, ID; sons Thomas (Ilene) of Phoenixville, PA, John T. Jr (Elda) of Phoenix, AZ, Nicholas (Mariko) of Chateauguay, QC, and Andrew (Kris) of Newmarket, NH; as well as numerous grandchildren and great-grandchildren. In addition to his parents he was predeceased by a daughter, Linda, and a son, James.

Wilkinson-Beane-Simoneau-Paquette Funeral Home & Cremation Services, 164 Pleasant Street, Laconia, NH is assisting the family with the arrangements. For more information and to view an online memorial go to wilkinsonbeane.com.