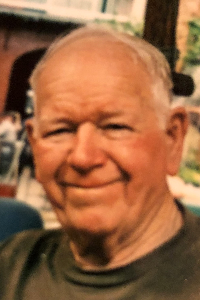 Somerset- Thomas Joseph Jermyn (TJ), age 97, a resident of Somerset for most of his adult life, peacefully passed away on January 15, 2020.

Tom, or “TJ” to his family and friends, was born on March 4, 1922 in Gulfport, Mississippi. His parents, George and Mary (Peppard) Jermyn, raised a family of 8 boys and 3 girls.

Tom graduated from Gulfport High School and enlisted in the U.S. Navy where he served on the U.S.S. Baltimore in the Pacific Theatre during WWII. He was awarded the Asiatic Pacific Ribbon, five Bronze Stars, and a Philippine Liberation Ribbon before his Honorable Discharge in 1946.

After his discharge he relocated to Massachusetts to marry the love of his life, Hilda Souza, whom he had met while stationed in Newport. The two celebrated 41 anniversaries until her death in 1989.

Throughout their life together Tom worked as a Machine Operator at Newport Finishing Corporation. He was a lifetime member of St. John of God Parish in Somerset.

One of Tom’s early passions was fast pitch softball, and he was a well known pitcher in a number of organized leagues around the area. He also enjoyed his bowling league, as well as fishing and golf. He continued to play Bingo throughout his life and enjoyed his weekly dinner and movie with his son-in-law. He was an avid Patriots fan. More than anything, Tom enjoyed family celebrations with his children and grandchildren.

In addition to his parents and wife, Hilda, Tom is predeceased in death by his ten siblings: brothers, George, Billy, Jack, Bobby, Dick, Harry and Pat Jermyn; and sisters Enola Jermyn, Thelma Duling and Catherine Wood.