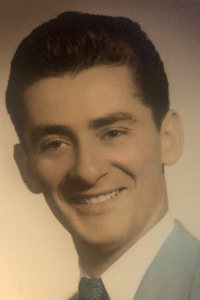 Henry F.J. Fournier, 91, of New Bedford, formerly of Dartmouth, passed away on Tuesday, January 14, 2020 at Sacred Heart Home. He was the husband of the late Jeanine (Fournier ) Fournier and the late Helen A. (Monteiro) Fournier.


Mr. Fournier was born in New Bedford, son of the late Ernest A. and Lucienne J. (Proulx) Fournier and had been a longtime resident of Dartmouth before moving to New Bedford. Prior to his retirement, he was the owner/operator of Henry's Auto Body, New Bedford. He was an avid gardener and donated many of his home grown veggies to Sister Rose's House, New Bedford. He also enjoyed raising cows.


Survivors include his son: Robert Fournier and his wife Sandra Gosselin of Dartmouth; his daughter: Diane T. Emond and her husband Kenneth of Freetown; 2 brothers: Jacque Fournier of Fairhaven and Ernest Fournier of Freetown; 2 grandchildren: Jessica Emond and Tyler Fournier; a great grandson: Nicholas Robbins; along with many nieces and nephews.


He was the brother of the late Helene LeMay.


Funeral service to which relatives and friends are invited will be Friday, January 17, 2020 from the Potter Funeral Home at 9:00 A.M. followed by a Mass of Christian Burial at St. George Church, Westport at 10:00 A.M.


Calling hours will be Thursday from 5-8 P.M.


Interment will be in Sacred Heart Cemetery, New Bedford.


Flowers are acceptable or memorial donations may be made to Sister Rose's House, 75 Division St., New Bedford, MA 02744.