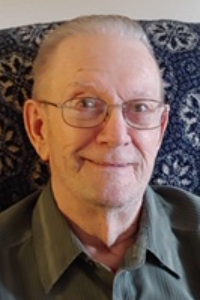 Limbert
Gerald Harry
January 13, 1932 – January 10, 2020, was born to Harry and Blanche (Hutchson) Limbert in Red Wing, MN. After graduating from Red Wing High School, he enlisted in the Army 501st Communications Recognizant Group, serving from 1950 to 1953 in Korea and Japan in the Army Security Agency (ASA). In 1955, he met and married the love of his life, Ardys Dahling. He went to work for Northwestern Bell right out of high school, taking time out for his war service, and returned to the phone company, retiring in 1989 after 39 years of service. Jerry was an avid sailor, proudly completing the Trans Superior Race in 2005. He was a fabulous handyman, he loved to travel, and he was also a hunter and a fisherman. Jerry and Ardie lived in Bloomington for 30 years, downsized to Woodbury to live near their daughter, Lori, then into retirement living in both Oakdale and St. Paul. He is survived by his wife Ardie; 3 daughters: Nancy and Paul Connolly of Brainerd, MN, Lori Engesser of Woodbury, MN, and Sheila and John Frey of Springfield, VA. He is also survived by 5 grandchildren and 7 great grandchildren. He is predeceased by his 3 brothers, stillborn, Glenn Alan and James Marshall. Services will be held at Lutheran Church of Peace, 47 Century Ave. S., Maplewood, MN 55119 on January 18 at 1:00 pm with visitation after. Interment will be at a later date in Ft. Snelling National Cemetery. In lieu of flowers, memorials can be made to Lutheran Church of Peace or Alzheimer’s Association.