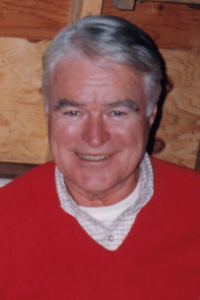 Ronald P. Noonan, 88, of Marion passed away Wednesday, January 8, 2020 with his family by his side after a brief period of declining health.

Born in Somerville, MA, son of the late Arthur and Edna (Roma) Noonan, and predeceased by his brother Barry of Winsor, CT. Ron lived in Weston, MA for most of his life and later settled in Marion, MA, after his retirement.

Ron was a graduate of Harvard University with a degree in physics. Ron played 4 yrs. as a defensive back for the Football team, and boxed his freshman year. Following his graduation, he enlisted in the U.S. Navy during the Korean War, and attended Officer Candidate School in Washington, D.C. He later became the CIC Officer of the U.S. Naval Destroyer Amin.

Following his Naval service, Ron was employed by Honeywell, ECRM, and DEC. He later joined Francis Lee, a college friend, and assisted with the establishment of Lexicon Corp., eventually becoming the CEO. Under Ron’s tutelage, Lexicon became revolutionary in the music and movie industry with major advancements in reverb sound analytics which eventually won them an Emmy Award in 1985.

Ron enjoyed skiing, and more so racing, and cruising his beloved Wildflower throughout New England and the Caribbean. He mostly enjoyed sharing his knowledge of sailing with anyone that had a desire to learn. He was the winner of many races including a 2-time overall winner of the Marion/Bermuda race, 5-time Rolex St. Thomas Regatta winner, multi-time Buzzards Bay Regatta winner, PHRF New England Champion, and multiple Figawi class winner. Ron was recognized for his consistent success in sailboat racing both regionally and internationally. Sailing was such a metaphor of his life. There’s competition, adventure, at sea, and more importantly social enrichment. His intellectual discipline at the helm of his beloved Wildflower mirrored his business skills, and accomplishments. His leadership involved a vast knowledge guided by experience, sound judgment, and strong communication skills. He had it all in spades.

He had been an active member of the Beverly Yacht Club since 1978 and was member of The Harvard Club.

Ron is survived by his wife, Ina Anderson; his son Richard Noonan and his wife Dorthe of Gloucester; his daughter Michelle Pope and her husband Jonathan of Mattapoisett; three grandchildren, Jonathan, Nancy, and Madeline Pope; his first wife, Michaline Flaherty of Annisquam, MA; his sister Carol Driscoll of Arlington, MA; and many nieces and nephews.

Visiting hours and burial are omitted. In lieu of flowers, donations in Ron’s memory may be made to Community Boating Center, 1641 Padanaram Ave., New Bedford, MA 02740. For online guestbook, visit www.saundersdwyer.com.