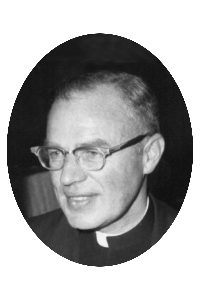 Rev. John L. Doyle, 93, a priest of the archdiocese of Boston for 68 years who worked with the poor people of Bolivia for 24 years and then came home to continue that work in Boston, died on January 12, 2020. “I decided I wanted to spend my last years with people who are up against it,” he said, and he sought assignments in bilingual parishes with large Hispanic and minority congregations.

His last full-time assignment was as pastor of St. Peter’s Parish in Dorchester after which he preached and offered Sunday Mass at Most Holy Redeemer Parish in East Boston, where he was especially beloved by the Hispanic congregants.

Born on January 11, 1927, Fr. Doyle was the son of the late Donald Joseph and Mary Catherine (MacDonald) Doyle. His parents immigrated from Cape Breton Island, Nova Scotia and met in Boston. Rev. Doyle attended St. Mark elementary school, Boston Latin School and St. John’s Seminary. He was ordained in 1952 and served in North Reading and Chelsea, then accepted a mission assignment in Vernal Utah for five years before joining the Society of St. James to work in Latin America.

He was the oldest of six children and was deeply beloved by his extended family and many friends and parishioners, including: his late brother Donald J. Doyle and his late wife Margaret of Oxford Florida, his sister Sr. Mary L. Doyle, SND of Ipswich; his sister Catherine Muirhead and her late husband Donald, now of Middleboro, his sister Anne Kenney and her late husband Joseph, now of Sharon and his brother James S. Doyle and late wife Ann, of Gaithersburg Maryland.

He is survived by his three sisters and his brother, James, by three generations of nieces and nephews, and by close friends Martin and Cheri Andes of Framingham and their sons

Relatives and friends are invited to Visiting on Friday 2:00 to 4:00pm at Regina Cleri Residence 60 William Cardinal O’Connell Way, Boston and 5:00 to 7:00pm in Most Holy Redeemer Church, 72 Maverick St., Boston with a mass to commence at 7:00pm. A Mass of Christian Burial will be Saturday at 10:00am in St. Joseph Catholic Church 68 William Cardinal O’Connell Way, Boston. Interment to follow New Calvary Cemetery 366 Cummins Highway, Roslindale, MA 02131.