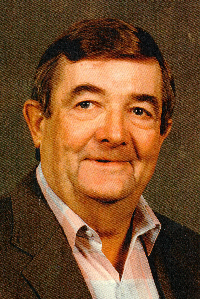 Robert Mann Thoms Jr, age 93 of Prosser, entered into rest on January 11, 2020 in Richland. He was born on January 8, 1927 in Seattle, the only child of Robert Sr. and Alfreda (Christensen) Thoms. His father worked as a jailor and also raised and trained hunting dogs and his mom was a homemaker. Bob had an awesome childhood growing up in a country setting, helping his dad train hunting dogs, going hunting and riding horses. He lived in Kent until the family moved to Prosser in his late teens.

After high school, Bob eventually worked for the Benton REA as a lineman, retiring after thirty years. He had no fear of heights. He also helped at the Sheriff’s office, reloading bullets for them. He met his wife, Dorothy, at the Prosser Skating Rink. They married in September of 1950 and recently celebrated their 69th anniversary.

Bob competed in calf roping events in rodeos. He had his own roping arena and had Saturday night roping events. He enjoyed listening to western music, Frank Sinatra songs and watching Seattle Sonics basketball games or a rodeo on television. He liked going for walks, any sweet snacks, especially chocolate and a good cup of coffee. He also enjoyed dancing, bowling, roller skating, hunting and was also a gunsmith. He spent two weeks on a special hunting trip in Alaska. He was a longtime member of Friendship Baptist Church.

Viewing will be held from 11:00-3:00 Friday, January 17th at Prosser Funeral Home. A private family graveside service will be held at 10:00 Saturday, January 18th at the Prosser Cemetery. A Celebration of Life will follow at 2:00 at Friendship Baptist Church in Prosser. You may leave a message for the family at www.Prosserfuneralhome.com