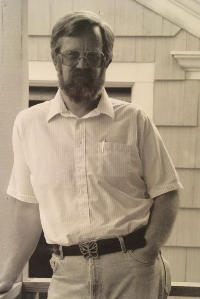 WINSLOW- Larry Charles Jackson passed away peacefully at Maine Medical Center on January 3, 2020 at the age of 66.  He was born in Baton Rouge, LA on September 21, 1953, the son of the late Charles and Katherine Jackson.

Larry attended school in both Waterville and China, ME and graduated from Waterville High School with the class of 1971.  He went to work at Kimberly Clark Paper where he stayed until the mill shut down.  He began a second career as a custodian in the Augusta school district before ending his last years at his beloved Vassalboro Community School.

Larry was an avid photographer and welder. He could build or repair anything and frequently took on projects for friends and family.  Later in life he took great pride in taking care of his Aunt Marjorie Jackson every chance he had.  Larry had an amazing, dry sense of humor that was beloved by all who knew him.

He is survived by his wife - Lynne Moses Jackson, his sons - Matthew Jackson and partner, Melissa Hunnefield of Augusta, Joshua Jackson and wife Shannon of Fairfield and their mother Rose Jackson of Thomasville, NC as well as Lynne’s son - Matthew Howard.

His faithful dog Arlo will be ever watching for his return.

A Celebration of Life gathering will be held at the Winslow VFW, 175 Veterans Dr, Winslow, on February 1 beginning at 2 PM.

Online condolence messages can be submitted at www.mainefuneral.com
In lieu of flowers memorial contributions can be made to
Vassalboro Community School Backpack Program and Charitable Donations to Vassalboro Community School. In care of Megan Allen the principal. Address: 1116 Webber Pond Road. Vassalboro, Maine 04989. As well as the Animal Humane Society Waterville Area. Address: 100 Webb Road. Waterville, Maine. 04901. Online at Hswa.org