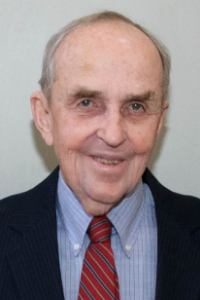 John Merritt "Jack" Sargent passed away peacefully on January 9, 2020, at the age of 89. He was born June 25, 1930 in Rutland, Vermont, the first of seven children of Fletcher Merritt and Grace (Briggs) Sargent. Jack grew up in Rutland and Chittenden Vermont, graduating from the Barstow Memorial School in Chittenden in 1948, and from the University of Vermont in 1952, with a Bachelor of Arts degree in history.

On October 25, 1953, Jack married Miriam Ann Sunderland of St Albans, Vermont and they moved to Germany where Jack was stationed as a 1st LT Medical Service Corps at the US Army base in Budingen. After Jack was honorably discharged from the US Army in 1955, he and Miriam started their family and resided in Essex Junction and Burlington VT, later moving to Rutland Vermont, then West Springfield MA, Gorham Maine and in 1966 moved to Manchester, New Hampshire, where they have resided since.

Mr. Sargent’s career was spent working for the Social Security Administration as a federal employee. The program was young when Jack first started and in the course of this work, he would visit Ida May Fuller of Ludlow VT, the first person to ever receive a social security check from the US Government. Jack worked in regional SSA offices around northern New England including Burlington and Rutland VT, Springfield MA, Portland ME, Concord and Manchester NH. He completed his career as the Area Director of Northern New England out of the Portsmouth NH regional SSA office. Jack retired in 1985, received the Commissioner’s Citation, an honorary award, and enjoyed the annual luncheon of SSA retirees in Kittery for many years thereafter.

Family and Friends recall stories of Jack that reflect a life of dignity, integrity, hard work, and dedication. Jack was gracious, sincere and humble, and you would remember his handshake and sincere greeting from when he first met you. Jack was an avid reader his entire life, favoring nonfiction and was a knowledgeable historian. Upon retirement, he took to walking long distances early in the morning and kept active for over thirty years. The experience of growing up during the Depression, framed his values and conservative approach to life. Jack worked odd jobs at a young age, including picking rocks out of a meadow that would expand into the Rutland Country Club, and later retrieved golf balls from water hazards to earn pennies, and caddied for the occasional golfer. Jack enjoyed golf as an opportunity to connect and spend quality time with his sons, grandson, siblings and friends. He believed individual and team sports taught respect, perseverance, and self-confidence.

Jack’s Grandmother would pay him for help with her orchard and with her flock of turkeys. His brothers kidded him on spending his entire earnings on chocolate drops or an ice cream. Later Jack’s family moved to their own subsistence farm in Chittenden VT, with no central heating or running water, where he worked chores on the family farm with his siblings, taking care of livestock and haying. Jack attended the local Barstow Memorial School and was the valedictorian of his small rural class. He received grant funds to complete his education at the University of Vermont. During the summers, Jack and his brothers would find time to relax at the village store, savoring a snack, and listening to music. One day as they were enjoying a respite from the farm, Jack met Miriam while she was horseback riding up the road, and so began the melding of their future path together. Once Miriam entered the University of Vermont, a year after Jack, they began their courtship in earnest and were married in 1953.

Jack stayed close to his extended family throughout his life, returning often to Vermont for family gatherings, picnics, reunions and hunting season. He and his brothers enjoyed decades of hiking wood trails during deer season, telling stories in the camp, saying grace and giving thanks. Jack always loved to hear from and of, his grandchildren, nieces and nephews. He felt privileged and humbled to have their love and respect returned.

Predeceasing John were his sisters-in-law; Emma Jean Sargent of Worcester VT, and Glenna Sargent and Judy Sargent of Chittenden VT.

In lieu of calling hours, a Celebration of Life Service will be held on Saturday, February 8, 2020 at 11:00 a.m. at St. Paul’s United Methodist Church on Smyth Rd. in Manchester, NH. Private family burial will take place in Vermont at a later date.

Memorial contributions may be made in Jack’s memory to the Vermont Youth Conservation Corps, via their website https://www.vycc.org/support-us/ or his family invite you to make a contribution to a charity or non-profit that has touched you or the lives of your family.