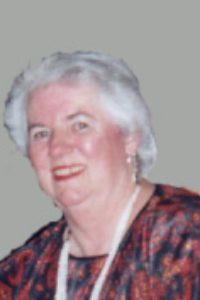 Kathleen E. (Hill) Tonelli age 91 of Brockton died peacefully in her sleep on January 10, 2020. Born February 8, 1929 in Brockton a daughter of the late Jamie Austin Hill and Ethel Mae (Flanagan) Hill, she remained a lifelong resident of the city. A 1946 graduate of Brockton High School, she received a Bachelor’s degree from Bridgewater College in 1950 where she also received her Master’s degree in Education.

In 1953 she married and she and her husband purchased their first home. She had been an elementary school teacher at the Kingman, St. Colman’s, and Downey schools retiring in 1994.

Kathleen enjoyed summers at Onset and Swifts Beach in Wareham. She also enjoyed knitting, crocheting and was an accomplished seamstress. She sang in St. Colman’s choir and with the Sweet Adeline’s in Abington.

A strong-willed and independent woman, Kathleen took great pride in her four children. She is survived by Brian Tonelli and his wife Kim Hanrahan, Mark Tonelli and his wife Rosemary, and Maura Tonelli all of Brockton and the late Neil Tonelli. She leaves six grandchildren Jamie, Justin, Brian, Jennifer, Megan and Kayla and four great grandchildren Logan, Zakary, Layla and Mirabelle. Kathleen was sister of the late James A. Hill and Arlene (Hill) Mathewson and wife of the late Eugene Tonelli.
Visitation will be held at Conley Funeral Home, 138 Belmont Street, (Rte 123) Brockton on Wednesday, January 15, 4-7 p.m. with a Funeral Service at 7pm. In lieu of flowers please make a donation in Kathleen’s name to the charity of your choice.