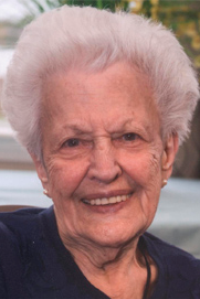 Marion E. (Fortunato) Visconti of Medford, age 103, died on Friday, January 10. A lifelong Medford resident, she was the daughter of the late Carmine and Linda (Arato) Fortunato. Marion was the co-owner and operator of MEV's store in Medford. She loved cooking for her family, cheering on the Red Sox, and playing BINGO, and could be seen driving around Medford in her PT Cruiser with the license plate "MEV." Marion was a member of MHS Class of 1934 and so proud to be a “fortunate” member of the Fortunato family.

“Good things come in small packages.” She was a petite woman (only 4’10 at her best) but was strong and pretty great. Whether Marion, MEV, Mom, or Nana, she was impactful and will be missed. Marion was a great Nana who loved cooking her Italian specialties for holidays with plenty of leftovers for everyone to take home, going to the kids’ games and meets whenever she could, and traveling to Foxwoods or Mohegan Sun (she never made it to Encore).

A funeral mass will be celebrated in St. Raphael Church, 512 High St., Medford, on Wednesday, January 15 at 11:30 AM. Relatives and friends are respectfully invited to attend and may visit with family at the Dello Russo Funeral Home, 306 Main St., Medford from 9 through 11 AM. Services will conclude with burial at Oak Grove Cemetery, Medford.