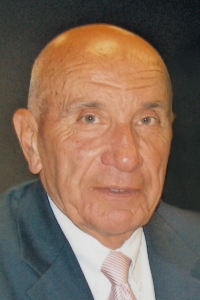 Surrounded by his family, Edward Wright Sylvia, 83, of Mattapoisett, passed away on January 9, 2020 from complications of Alpha One Antitrypsin Deficiency.
Born in New Bedford to Joseph E. and Helen Wright Sylvia, Ed is survived by his wife and best friend Sandra (LaStaiti) Sylvia.
Ed received his Bachelor of Science degree from NBITT (now the University of Massachusetts) where he was a member of the Delta Kappa Phi fraternity. He was inducted into the UMass Tennis Hall of Fame in 2007. He served for seven years in the Army National Guard.
Ed had a long and successful career in the wholesale beverage industry in both management and sales and was a prior owner of Trio Liquors and Ocean Vending.
Ed was a man of tremendous energy and enthusiasm. When he got his first rowboat at age 7, boating became his passion and continued throughout his life. Nothing made him happier than being on his boat Moonstruck cruising Buzzards Bay and the Islands with his family and Cuttyhunk Cruising Club friends.
A member of the Bay Club of Mattapoisett and the Country Club of New Bedford, he was an avid tennis player and in his later years a so-so golfer. He was also a prior member of the Prince Henry Society and the Coast Guard Auxiliary.
Most importantly, Ed was a husband, father, friend and adored “Poppy” to his grandchildren. He loved people and will best be remembered for his tremendous loyalty to his family and friends.
In addition to his wife Sandy, Ed is survived by his children Pam Callanan and Barry Sylvia and a large extended family including Lisa and Harry Segalas, Laurie and Nick Bolintiam, Duncan and Gretchen MacDonald and Brendan and Maite MacDonald. Poppy had numerous grandchildren and great-grandchildren including Meaghan Olejarz, husband Andrew, and children Lila and Teddy, Alyssa Irvine and husband Brian, Matthew Sylvia, Chris Sylvia, Kyle MacDonald and Jonathan Knoll, Haley Sheets, husband Cody and daughters Kimberly and Olivia, DJ MacDonald, Brendan, Zane, Annie and Mack Segalas and Nelson MacDonald.
Family and friends are invited to attend a memorial service on Saturday morning June 6th at the Bay Club of Mattapoisett. A private family service was held on Saturday Jan. 11th at the Saunders-Dwyer Mattapoisett Home for Funerals. Burial with military honors followed in Riverside Cemetery, Fairhaven. Donations in his memory can be sent to Alpha-1 Foundation, ATTN: Development Office, 3300 Ponce de Leon Blvd., Coral Gables, FL 33134 or via the website at alpha1.org. or to The Center for Regenerative Medicine (CREM) and the Alpha-1 Center of Boston University and Boston Medical Center, c/o Dr. Andrew Wilson, 670 Albany St. 2nd Floor, Boston, MA. 02118. For online condolence book, please visit www.saundersdwyer.com.