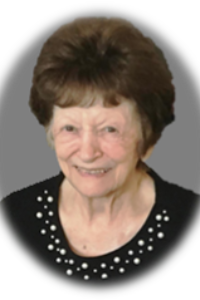 Angela M. MacCormack (Raso), age 96, of Canton passed away peacefully in her sleep on Thursday January 9th. She was the beloved wife of the late Robert A. MacCormack. Born in the village of San Giorgio in Calabria, Italy on October 24, 1923, she was the daughter of the late Salvatore and Annunciata (Condo) Raso and immigrated to Boston in 1929. A graduate of Girl’s High School in Boston, Angela gave up a potential career in dress designing to help care for her younger brothers and sisters. She worked as a bookkeeper at the Charlestown Navy Yard, where she met and married her husband, Robert, at the onset of WW II. Reunited after the war, they raised their family in the West End of Boston until 1958, when they moved to Canton. Angela was enormously devoted to her children-she relished cooking, caring for the home, and designing dresses for her young daughters. She was a strong believer in her faith and was an active member of St. Gerard Majella Parish in Canton and the Canton Catholic Women’s Club. She wholly imparted her love for her family, her independent spirit, and her buoyant nature to Robert, her children, her grandchildren, and her great grandchildren.
Beloved wife of the late Robert A. Mother of Robert D. MacCormack and his wife Suzanne of Hilton Head Island, SC., Nancy K. Kinney and her husband Peter of Londonderry, NH, Donna M. Lane and her husband Errol of Mansfield, Gerard MacCormack and his wife Kathleen of Londonderry, NH, Stephen A. MacCormack and his wife Karen of Cohasset. Sister of Dominic Raso and his wife Dorothy of Stoneham, Richard Raso and his wife Jeanette of Reading, Alfred Raso of Boston, Elena Intravaia and her late husband Salvatore of Medford and the late Vincent Raso and his wife Theresa of Boston and the late Frances Musto and her late husband John. Also survived by 14 grandchildren and 24 great-grandchildren. Visiting hours at the Dockray & Thomas Funeral Home, 455 Washington St., Canton, Tuesday 4-7 pm. Funeral Mass at St. Gerard Majella Church, Canton, Wednesday morning at 10. Interment St. Mary Cemetery, Canton. Donations may be made in her memory to “Our Neighbors in Need” c/o St. Gerard Majella Church, 1860 Washington St. Canton, MA 02021. For guestbook see www.dockrayandthomasfuneralhome.com