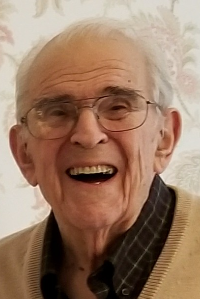 Paul Benjamin Landry, 91, of Winchester, passed away peacefully on January 6, 2020. He was the son of the late Albany and Barbara (Loftus) Landry. Paul was born in Cambridge and grew up in Somerville He attended St. Clement High School in Somerville and Harvard University, Class of 1952. He served in the U.S. Army and was stationed in Korea at the end of World War II. Paul was a lover of words, songs, stories and jokes.

Paul was the beloved husband of his wife of 68 years, Mary (Steeves) Landry and will be missed greatly by his six children, Paul Landry and his wife Jennifer of Washington Georgia, Janet Landry Shea and her husband Frank of Groton, Susan Landry of Watertown, Mark Landry and his wife Helen Durkin of Medway, Christopher Landry of Northampton, and Celia Ceruolo and her husband Christopher of Winchester. He will be remembered for his kindness and humor by nine beloved grandchildren: Michelle, Mark, Michael, Kate, Emily, Benjamin, Dylan, Stephen and Elizabeth. He was predeceased by his siblings Edward Landry, Francis Landry, Barbara Melley and Mary Landry.

Relatives and friends are kindly invited to gather at Costello Funeral Home 177 Washington St., Winchester, on Tuesday, January 14 from 4-8 PM, and again on Wednesday, January 15 at 9AM followed by a Funeral Mass in St. Mary’s Church, 155 Washington St., Winchester, at 10AM. Burial will follow in Oak Grove Cemetery, Medford. In lieu of flowers, please consider a donation in Paul’s memory to St. Jude Children's Research Hospital, 501 St. Jude Place Memphis, TN 38105. www.stjude.org.