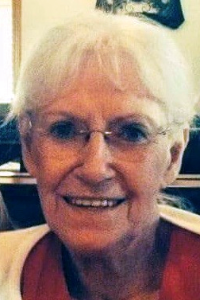 Carole A. ‘Billie’ (Irzyk) Jalbert, 82, passed away peacefully at Advinia Care at Salem on Wednesday, December 11, 2019, following a long illness. She was the devoted wife of the late Roland E. ‘Cookie’ Jalbert.
Born and raised in Salem and Lynn, She was the daughter of the late Joseph R. and Gertrude M. (Burke) Irzyk. A graduate of Lynn English High School, Billie and ‘Cookie’ married in June of 1962. She worked for several employers and was also devoted to the care of her family. As her children progressed in their schooling, she returned to the work force at Ledgewood Rehabilitation and Nursing Center in Beverly. Most of Carole’s work career was in health care. Throughout her life she was active in many organizations and fundraising events.
Carole is survived by her sons, Wayne C. Jalbert and his wife Kathleen of Danvers, Scott R. Jalbert and his wife Kimberly of Salem, her daughter, Debbie A. Consoles of Danvers, and former son-in-law, Michael Consoles of Haverhill, her brother J. Robert Irzyk and his wife Joanne of Peabody. She also leaves 6 grandchildren, Christina, Nikki Ann & Michael Consoles, Nicholas & Matthew Jalbert and Christopher Jalbert as well as her in-laws, Arthur ‘Sonny’ Jalbert and Malvina Martel and her husband, Paul ‘Joe’ Martel. She was predeceased by his sister, Judith Jeter and her husband George Jeter.
Private services were held. In lieu of flowers memorial contributions may be made to the National Kidney Foundation at www.kidney.org/support. Assisting her family with Carole’s arrangements was the Levesque Funeral Home of Salem. For guestbook, please visit www.LevesqueFunerals.com