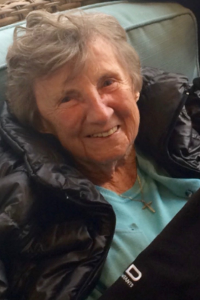 She was loving wife of Joseph P. Masotta, Sr. with whom she celebrated 61 years of marriage. She was born in Boston, October 31, 1930, daughter of Alexander F. and Hattie M. (Smith) Shaw. She graduated from Jeremiah Burke High School. She worked at Salada Tea and later for Calverts of Needham. She was a loving and dedicated homemaker. Besides her husband, she is survived by 2 children, Donna M. Purnell of Medway and Joseph P. Masotta Jr. of Westwood, Son-in-law William (Bill) Purnell III of Medway, a sister, Marguerite C. Shaw of Seekonk and 6 Grandchildren, Nicole Daniels of Franklin, Kristin and Michael Purnell of Medway, Rachel, Joseph III and John (Jack) Masotta of Westwood; 2 Great Grandchildren, Cameron and Cassandra Daniels of Franklin. She also leaves 2 sisters-in-law, Ann Shaw of Plymouth and Maryalba Shaw of Rochester, MA and a brother-in-law James Frawley of North Chelmsford; and many nieces and nephews and several close friends. She was also the sister of the late Norma Thornton of Boston, Albert F. Shaw of Hopkinson, Donald A. Shaw of Texas, Robert A. Shaw of Randolph, Paul D. Shaw of Boston and Gail H. Frawley of North Chelmsford. She will be greatly missed and is loved by her husband and family.

Funeral from the George F. Doherty & Sons Wilson-Cannon Funeral Home, 456 High St. Dedham on Friday, January 10, at 9am followed by a Funeral Mass in St. Mary Church, Dedham at 10am. Relatives and friends kindly invited. Visiting hours at the funeral home on Thursday, January 9, from 4-8pm. Interment in St. Joseph Cemetery, West Roxbury. In lieu of flowers expressions of sympathy may be made in Mary’s memory to St. Mary Church, 25 Avery St. Dedham MA 02026.