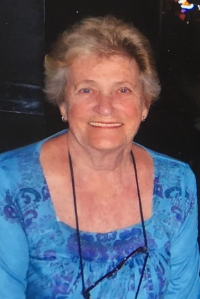 Mary Ann was the daughter of the late James L. Shea and the late Anna A. (Lynch) Shea. She was born in Tewksbury on April 19, 1936, attended Tewksbury schools, and graduated from Tewksbury High School in 1955.

Mary Ann was a long-time resident of Nashua NH, where she had a long career in the real estate industry. She was a principal of Fawn Realty in the 70’s, a Mortgage Originator for Nashua Federal Savings and Loan in the 80’s and, a sales agent and broker for Codman and Company, and later for Anne Frazier Realty in the 80’s and 90’s. After moving to the Dover area, and in her retirement, Mary Ann worked part-time for many years in the sporting goods department at the local Walmart in Somersworth, NH. Mary Ann loved her time there, where people came to know her as a friendly face and a knowledgeable resource.

Mary Ann was married in 1956 to Ernest T. Carey of Tewksbury MA. They were married for 27 years and raised their family of five children in Nashua NH. In the early years, Mary Ann’s primary vocation was as a loving mother to her children. Her closest friend was next-door neighbor Betty Scanlon and they spoke nearly every day for more than fifty years. The Scanlon and Carey families remain as close today as their houses were on Thompson Road in Nashua.

As a former high school athlete, she enjoyed attending the athletic events of her children and her grandchildren. Mary Ann kept active, golfing as a member of the Nashua Country Club, and later on the local courses of the New Hampshire seacoast. During her retirement years she enjoyed her independence; exploring the back roads of New Hampshire and Maine. She would often get in her car, pick a spot on a map, and drive to see what the world held for her as is evidenced by the 37 road, attraction, and places of interest maps in her car to this day. Her greatest pleasures were finding treasures in the world around her and bargains at Marden’s Surplus and Salvage; both of which she would share with family and friends. Mary Ann found fascination in what she found wherever she went, and whatever interest she pursued. Mary Ann was facile with technology, wielding her personal computer, iPad, and Kindle to stay connected with family, friends and the world. A voracious reader, she read deeply into the history of Ireland, England, and the royalty of medieval Europe. Mary Ann lived independently until the final weeks of her life. She admired the Irish poet W.B Yeats and was a partisan advocate for all things Irish. She was intelligent and self-educated, and expanded her knowledge continuously throughout her life.

Mary Ann’s greatest pleasure was time spent with her family and friends. The most special times for her were holidays spent when all her children, grandchildren and great grandchildren were together. Trips to visit with her brothers and sisters in-law and old friends, some of these friendships spanning seven decades, were a source of great delight. Mary Ann provided a sense of family beyond bloodlines that she shared with, and instilled within, her family and friends. These bonds will remain beyond her passing.

Mary Ann was the sister of the late James L. Shea of Litchfield, NH.

She is also predeceased by her closest friend and sister-in-spirit, Betty Ann (Mahoney) Scanlon and her husband Shaun Scanlon.

She is also survived by her children’s father, Ernest T. Carey and his wife Francoise of Henderson, NV;
and her sisters and brothers in-law: Jane Carey of Honolulu HI, Liz Carey of Tewksbury MA, Bette Carey, formally of Tewksbury MA, now of Nashua NH, Russell and Lorraine Carey of Dartmouth MA, Angela (Carey) and her husband Dan Lochmandy of Nashua NH, and Carl Carey of VA. She is also survived by literally dozens and dozens of nieces and nephews, and many other extended family members.

In place of flowers; her family prefers donations be made to the Alzheimer’s Assoc., 309 Waverley Oaks Rd., Waltham, MA 02452 in memory of her dear friends Shaun and Betty Scanlon.