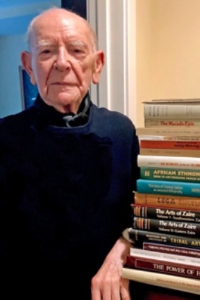 Biebuyck, Daniel P. world-renowned Anthropologist, died on December 31, 2019. He was born in Belgium in 1925 and died in Newton, Massachusetts at the age of 94. After studying classical philology and law at the University of Ghent (Belgium), he specialized in cultural anthropology at the London School of Economics. He went on to conduct fieldwork in the Democratic Republic of the Congo from 1949-1961. Daniel then relocated to the United States where he became a professor of Anthropology in several American universities, notably the University of Delaware and UCLA. His pioneering research made him the leading authority on the cultural traditions of the Bembe, Lega, and Nyanga social groups. Among his many publications in English, French, and Dutch, two of his most-acclaimed are: The Mwindo Epic (1969) and Lega Culture (1973). He was the recipient of numerous honors, grants, and fellowships, including the Rockefeller Foundation Humanities Fellowship, the John Simon Guggenheim Memorial Fellowship, and the National Endowment for the Humanities. In 1989, he retired from the University of Delaware as H. Rodney Sharp Professor of Anthropology and the Humanities.

He will forever be remembered for his boundless energy and his commitment to preserving knowledge for posterity.