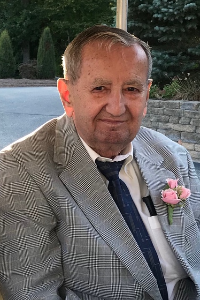 Mr. Donald C. Fraser, a longtime resident of Andover and beloved husband of Beryl A. (Mills) Fraser, passed away at the Lawrence General Hospital on Monday, December 30, 2019. He was 88 Years old.

Born in Methuen, Massachusetts, on April 3, 1931, he was the beloved son of the late Charles J. and Lillian (Butterworth) Fraser. Mr. Fraser was a US Army Korean Veteran, entering the military at Ft. Dix, New Jersey on April 24, 1950 and receiving his honorable discharge from Ft. Jay, New York on July 31, 1953. Mr. Fraser was awarded the Combat Infantry Badge, Parachute Badge and the Purple Heart for his exemplary service. In civilian life, Don worked for the US Postal Service as Clerk and later as Postmaster in Chelmsford, MA.

In his spare time, he enjoyed hunting, fishing and golfing. He was an avid Red Sox fan. Above all, Mr. Fraser was a devoted husband, father and grandfather and great-grandfather. He will be dearly missed.

Besides his beloved wife, Beryl, he is survived by his loving children; Gary D. and his wife Sheila Fraser of Haverhill, Donna Lee Fraser of Andover, the late Diane Ortiz and her husband Efrain of Atkinson, New Hampshire, Marlene and her husband Mark Couture of Andover, Scott Fraser of Pelham, New Hampshire and Donald C. and his wife Trish Fraser of Harrisburg, Oregon, Half Siblings Gertrude Yepez (Juan, deceased), Catherine Lake (Oliver, deceased), Charles Fraser Jr (Jane) and Marilyn Litts (Terry) from Wisconsin, 19 grandchildren, 21 great-grandchildren as well as many nieces and nephews. He was also the loving brother of the late Arlene Earnshaw.

His Funeral Service will be celebrated in the Burke-Magliozzi Funeral Home, 390 North Main Street, Andover on Saturday, January 4, 2020 at 5 PM. Relatives and friends are most welcome to attend. Calling hours will be held in the funeral home, prior to the service, from 3 to 5 PM. Interment will be privately held at a later date. For additional information, please visit, www.burkemagliozzi.com.