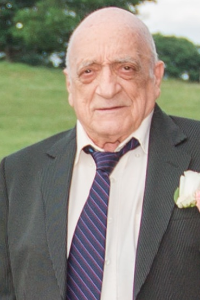 WORCESTER; Anthony F. "Tony" DeMarco, Sr., 88, of 485 Grove St., died Monday, December 30 at St. Vincent Hospital in Worcester after a brief illness.
He was the husband of Joan L. (Whitman) DeMarco who died in 2012.
He leaves two sons, John J. DeMarco and his wife Lisa of Holden, Anthony F. DeMarco, Jr. of Worcester, two daughters, Darlene M. Frigon and her husband Wayne of Worcester, Debra A. Collaro of Nashua, NH, two brothers, a sister, seven grandchildren, five great-grandchildren and several nieces and nephews.
He was pre-deceased by four brothers; Joseph, Louis, Sam and Jay DeMarco.
Tony was a proud Veteran and served his country in the Army during the Korean War. He was a member of the Italian American Veterans Post #3 and the East Side Improvement Club both in Worcester.
Tony was born in Worcester to Annunziatto & Angelina (Gioella) DeMarco.
He worked as a shipper-receiver for BEE Plastics in Leominster for 30 years, retiring in 1986.
As a young man, Tony was an avid candle pin bowler and held many local and state records. Tony participated in the Worcester Over 65 Senior Softball League for many years.
At the request of the family there are no funeral services. Burial will be private in Worcester County Memorial Park, Paxton and at the convenience of the family.
Donations may be made to the US Veterans Affairs Administration, 150 S Huntington Ave., Jamaica Plain, MA 02130.
The MORIN FUNERAL HOME, 1131 Main St., Leicester, are assisting the family with arrangements.