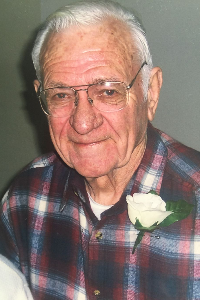 Jim Navarre was a loving, dependable and forgiving husband, father and grandfather. He had a deep faith in God. He was an avid fisherman who enjoyed nature, birds and being outdoors. He sang polkas and recited poetry while fishing with multiple generations of family on the pontoon boat. He was a storyteller. He loved music, played the concertina and digital organ. He grew up on a farm in the Polish community of Thorpe, Wisconsin. He was intelligent and crafty. He built his first home. He took many home movies, photos and videos. In his early career, he was a cheese maker, WW2 Army veteran, pilot for the Civil Air Patrol, worked for Culligan Water, 3M, and Whirlpool. He was a boiler engineer and custodian for Central High, Murry High and St. Bernard’s Catholic schools in St. Paul. He was proud to be a school bus driver for North St. Paul School district for 17 years. In his retirement he delivered Meals on Wheels for many years. He loved to play cards, Farkle and Wii bowling.

He dearly loved his nieces, nephews, cousins and friends, especially his friends at Gable Pines in Vadnais Heights and The Gardens of the Episcopal Homes.

We will always remember the love, the man and the spirit he left with us, in us and around us.