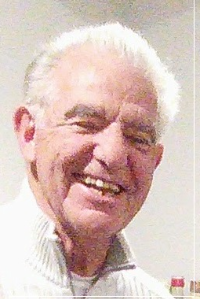 Cosmo F. Gallinaro, age 87, of Woburn formerly of Somerville passed away peacefully, December 26, 2019 at the Soldiers Home in Chelsea. He was the beloved husband of Catherine E. "Kay" (Russo) Gallinaro


"Smitty", as he was known to family and friends, was born in Somerville, MA on April 3, 1932 and also raised in Somerville. Smitty graduated from Somerville Trade School, and was drafted into the Navy to support the Korean War. He was assigned to an APA ship where he served as an Engine Diesel Man 2nd Class. Upon his return home, he married the girl-next-door, Catherine "Kay" Russo. He and his family resided in Somerville and then later moved to Woburn in the early 1970's.


As a husband and dad, he was protector, provider, and a dedicated family man. Smitty was best known as being the Go-To-Guy of the neighborhood and mastered all trades; automobiles, plumbing, HVAC, carpentry, electrical, and masonry to name a few. He welcomed challenging projects and was always willing to share his talents to help out a friend. In the early 80's he and his wife, Kay, made Osterville their summer weekend residence. There you could find him clamming, spending time at Dowses Beach entertaining his grandson, Jason, gardening, landscaping, socializing with the neighbors, and boating with both family and friends.


The Cape was his favorite of all places - he was fortunate enough to spend the majority of his retirement there. Though he had the opportunity to see many places throughout the world during his tour in the Navy, he always said there's nothing like Cape Cod. Smitty will be truly missed as a husband and dad, by his extended family, and as a friend.


Smitty is survived by his devoted children; Donna DeFuria of Woburn, and David Gallinaro and his wife Sandra of No. Billerica. He was the loving grandfather of Jason DeFuria and his wife Lydie of Woburn. Brother of the late Clara Russell. He is also survived by several loving nieces and nephews.


A funeral service will be conducted in the McLaughlin - Dello Russo Family Funeral Home, 60 Pleasant St., WOBURN, Tuesday, December 31st, at 10 a.m. Relatives and friends are respectfully invited to attend. Visiting hours will be held on Monday from 4 to 8 p.m. Services will conclude with military honors and burial at Woodbrook Cemetery, Woburn. It has been requested that in lieu of flowers contributions may be made to the Alzheimer's Assoc., 309 Waverley Oaks Rd., Waltham, MA 02452.