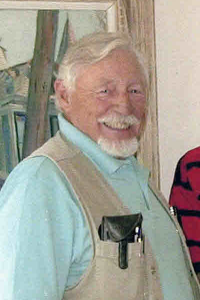 Anton Van Dereck Haunstrup, 87, known to all as ‘Napi’, died on Christmas Day at Cape Cod Hospital due to complications from COPD and pneumonia. He was the husband of Helen Haunstrup.

Born on March 12, 1932 in Des Plaines, Illinois, he was the son of the late Anton "Tony" Van Dereck Haunstrup and Catherine C. Murphy, known by many as "Pat" Saffron. Raised in Provincetown and New York City, Napi and his parents first lived in a shack in the woods owned by John Francis in 1932 eventually moving across the street from St. Mary's of The Harbor where his parents had a shop and lived in the property of Carrie Perry. In 1935 Napi attended nursery school in Greenwich Village New York City returning to Provincetown to Carrie Perry's House. The family eventually moved to a cottage on Miller Hill Road when his father became the Director of Childe Walker School of Design in Boston. In 1938 his parents bought their first house at 252 Bradford Street. In 1940 Napi's father, being ill, resigned from Childe Walker. Still living at 252 Bradford Street, Napi attended 5th grade at the Governor Bradford School in Provincetown. Sadly, on June 7, 1943 Napi lost his father when he was eleven years old. In the summer of 1943, his mother moved to New York City where she worked at various jobs and it was the start of many schools Napi would attend.

While living in New York City, Napi attended Friends Academy and Manumit Academy. In the fall of 1942 Napi's mother Pat met her future husband Jay Saffron in Provincetown, while he was assigned to the war department to film the testing of amphibious DUKW's (6 wheeled drive landing craft ) off New Beach (Herring Cove Beach), because the sand was found to be similar to the sand off Normandy in France where the WWII invasions were to take place. In December 1945, Jay & Pat married. In 1947-1948 while Jay was working for MGM/Metro News, the family went to Egypt and Israel. This was where the seed for the Eye of Horus, the symbols of Napi's future restaurant were planted. Returning from overseas, Napi attended Rhodes Preparatory School where he obtained his High School Diploma. At the age of eighteen, he moved with the family to Levittown in Hicksville, New York when in 1951 he joined the U.S. Coast Guard as a Seaman Recruit in signal/electronics communications. He was stationed for three wonderful years in Yakutat, Alaska. Upon completion of military service in 1954, Napi attended John Hopkins University in Baltimore MD., and finally in 1957 obtained his Bachelor's Degree in history from City College New York.

From then on, he became a world traveler. For a short time in New York he worked for Mobilization of Youth, teaching poor underprivileged kids a trade. He drove those kids on a school bus across country and back visiting historical landmarks. In 1957 he left on a freighter with a bicycle and went to Europe, travelling for almost a year to all parts of Europe, but mostly Russia.

In the summer of 1955, Napi met his future wife of 56 years, Helen Schmitt. Married in 1963, they started a life of adventure, travel, sailing and eventually the business of Napi's Restaurant. Napi had many passions, but probably his greatest passion of all was reading. He was a voracious reader consuming book after book and never letting a day go by without reading the New York Times and doing the crossword puzzle. He could tell you the histories of the World but could also expound in infinite detail the life of a termite. His other great passion of course was the love of Provincetown art and the painters and craftsmen from the town. His father was a tremendous artist and his enormous collection of paintings was in a way of celebrating his father.

Napi was also a tremendous sailor. He owned many boats and catamarans, and he and Helen would travel the intracoastal waterway to the Caribbean and back. They participated in many of the sailboat races that took place in Ptown through the 70-90's. Napi was also a member of the Provincetown Fire Department with Pumper Number 5. Finally in 1975, Napi and Helen started building the wonderful restaurant that exists today. The restaurant is eclectic with many art treasures gracing the wall s but one is very personal which hangs above the bar in the restaurant.

On October 24, 1976, the scalloper, Patricia Marie, sank off Nauset Light in the worst disaster to hit the Provincetown fishing fleet in 60 years. Aboard the scalloper was one of Napi's best friends, Richard "Dickie" Oldenquist. Only one body (Capt. King) was ever recovered. Above the bar is an amazing handmade model dragger that Dickie built called the "Panther", and was the model for a boat that Dickie dreamed of having one day. Very few times did Napi shed copious tears in public, but he could do so at the thought of Dickie.

In the last few years Napi occupied himself with gardening, attending the Beachcombers Club where his father had been a member, reading the New York Times and supporting the tremendous efforts of the Center for Coastal Studies. An animal lover he owned many cats and dogs, and loved to feed the hungry seagulls off Herring Cove Beach. Always on his bicycle you could find him usually down the wharf. He lectured at many events about art and history and if you were stuck sitting next to him at his bar at martini time you could have ended up a captive hostage to the story of his life and the history of the restaurant. Napi loved Provincetown! He knew more about it that most locals. It was his home.

In addition to his wife Helen Haunstrup, he is also survived by a sister, Judith B Saffron.

Family and friends are invited to call at the Gately Funeral Home, 94 Harry Kemp Way, Provincetown on Friday, January 3rd from 4 to 7 pm. A Graveside Service will be Saturday, January 4th at 10:00 am at Provincetown Cemetery, 24 Cemetery Rd, Provincetown.

A Celebration of Napi's Life will be Wednesday, January 15th from 1 - 4 pm at Napi's Restaurant, 7 Freeman St, Provincetown.