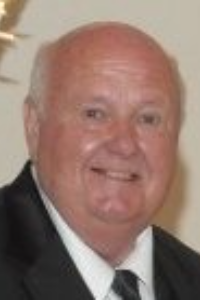 Former City Councilor John R. Nutting, 78, of Salem, passed away Thursday, December 26, 2019 at the Beverly Hospital following a brief illness. Jack was City Councilor for Ward 7 from 1980 through 1987 and from 1990 to 1991.
Born and raised in Salem, he was the son of the late Carroll E. and Gertrude F. (Corley) Nutting. Following his graduation for Salem High School, Jack joined the Coast Guard Reserves while working as a heat treater for the United Shoe Machinery Corp. in Beverly. He left the United Shoe for a position at the South Essex Sewerage District in Salem. His last employment was for the City of Salem in Constituent Services.
Jack was a well known figure in Salem who was devoted to his family and the City of Salem. In Jack’s younger years, he was active coaching Little League Softball. In his enthusiasm for local youth sporting events, he devoted much of his time to creating videos for many of the Salem High School athletic teams.
Jack leaves his five children, Lydia A. Sobocinski and her husband Ken of Windham, NH, John F. Nutting and Dustan Carpenter of Key West, FL, Matthew M. Nutting and Paula Diaz of Orleans, Allison L. Nutting of Waltham, and Shannon L. Parvis and her husband Ron of Midlothian, VA, a step-daughter Bethany L. Martin of Lexington, SC, his sister Patricia A. Palmer of Framingham as well as six grandchildren, Emma, Jack & Christopher Sobocinski, Christopher Nutting and Jordan & Dominic Parvis. He also leaves his former wife Frances Driscoll Nutting of Florida. He was predeceased by his brother, Donald E. Nutting.
Relatives and friends are invited to his calling hours on Sunday, December 29, 2019 at the Levesque Funeral Home, 163 Lafayette St. [Route 114 / 1-A] Salem from 2:00 to 5:00 P.M. His funeral service will be in the funeral home on Monday, Dec. 30th at 10:30 A.M., to be followed by his burial in Greenlawn Cemetery, Salem. For guestbook and additional information, please visit www.LevesqueFunerals.com