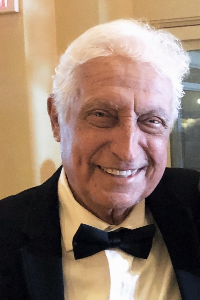 Rizzo, George Jerome of Natick formerly of Wellesley, 78, passed away peacefully with his loved ones at his side on December 25th after a battle with autoimmune liver disease. For a devout Catholic of remarkable and unwavering faith Christmas was the perfect day for his much-anticipated journey to heaven. George will join his beloved son Jerome and his father of the same name. George spoke frequently of the most vivid memory he has of his father; waving goodbye as his dad boarded a train in Waltham 75 years ago carrying him to war and his cruel fate.

George is survived by his wife Janice (Huggard) of 55 years, his son Jerome’s widow Henriette Rizzo, his daughter Julie Rizzo-Regenauer, and her husband Michael Regenauer, his daughter Robyn Rizzo, his son Christopher Rizzo and his wife Karen Rizzo. George (ie Papa) is also survived by his adoring and deeply cherished grandchildren William and Jacqueline Regenauer, Emily and Julianna Rizzo, and Lauren and Ashley Rizzo. He is also survived by his sister Carol Millen and her husband Richard, his sister-in-law Gladys Crovo, dozens of first cousins as well as nieces and nephews and a vast circle of friends.

George was born in Waltham on July 25, 1941. His father, Jerome Patrick Rizzo, Private First Class, U.S. Army, was killed in the closing days of World War II fighting the Waffen SS near Regensburg, Germany. Shortly afterwards his family moved to Wellesley. In a small compound of four apartments in two homes on Pine Tree Road he was adoringly raised by his mother Angela (Maccini), grandparents, aunts, and uncles. As the oldest male of 11 cousins and a leader by nature he became the organizer of all things fun and competitive. Even as they grew older, he cherished that role and they loved him for it.

George graduated from Wellesley High School in 1959 and then attended Babson College earning his bachelor’s degree in accounting and then completing his MBA in Finance in 1964. George started his career as an auditor at the GAO in Boston. A natural born risk taker, he left this secure position to build his own accounting practice in 1974. His outwardly gentle nature hid a ferociously competitive spirit and strong will. With little savings, four kids and a wife at home, he forged ahead with just one client, never doubting this brave, or perhaps, mis-guided, move. Although a skilled tax accountant, it was his charm that allowed the practice to flourish despite the odds and never once having advertised. In 1987 his cousin Maureen Bradosky joined him and later in 1993 his daughter Julie. Rizzo & Rizzo, CPA’s, became the go to accounting firm, particularly for the local Italians. But most importantly his clients became dear friends, growing his practice into an extended family where all grew to rely on his support far beyond simply his professional advice.

George was an exceptional athlete in his youth and continued participating in sports for much of his life. He loved performing under pressure and welcomed it with supreme confidence. His strong arm and athleticism were well-utilized as a shortstop in baseball, quarterback in football, and while earning the high scoring title as a point guard in basketball. He was a champion candle-pin bowler, often bragging (rightly so) that he threw the ball harder than anyone. An outstanding golfer, he swung hard and hit the ball long, out driving his sons even into his early 70s. He was also a skilled iron striker and putter culminating in a round of 74 at Emerald Dunes. He played the best golf courses in America, including Pebble Beach 4 times and Pinehurst. George was just as enthusiastic about golf as a spectator, having attended the first Presidents Cup, 2 U.S. Opens, 2 PGA Championships, and The Masters.

George was a devoted Celtics fan and season ticket holder since the early 1980's. He witnessed the 1984 and 1986 NBA Championships from his beloved 4th row seats and met KC Jones, who became a lifelong friend. His love of sporting events and enthusiasm for travel were obvious as he attended events in the U.S., Canada and Europe, including 3 Indy 500’s, multiple Army-Navy football games, the Kentucky Derby, and 3 Orange Bowls to name a few. When his son Jerry started as cornerback for the Williams College Varsity football team, he did not miss a single game for all four seasons.

Above all else George’s life should be noted for his kindness and generosity. Never judging and always giving were simply instincts. To know him was not just to love him, but to feel loved by him. He loved often and with ease. He was like the sun; you felt the warmth of his spirit when in his presence. His charisma was mesmerizing, and his storytelling legendary. If he regaled you with one of his stories, you would be compelled to listen to its hypnotic effect. He was rarely seen without a smile on his dimpled face or heard without his easy infectious laugh. He engaged complete strangers in conversation and quickly won them over with his magnetic personality. George had an astounding zest for life, an uncanny sparkle in his eye, even while fighting illness for decades. Throughout his entire life, he retained a youthfulness that made time seem to stand still. If a life well lived is marked by deep connections with others none could surpass that of this most loved and cherished man. His physical presence on earth will be missed but his spirit will shine brightly for all those fortunate enough to have shared in his deep love.