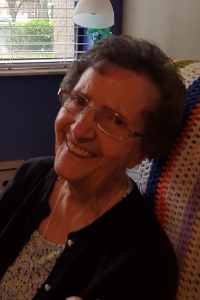 Henrietta “Babe” Halde of Winter Haven, FL went to be with the Lord on December 18, 2019 at the age of 96. She was surrounded by loving family and passed peacefully in her sleep. Babe was born on September 4, 1923 in Londonderry, NH to Ferdina and Albina Cote. She was preceded in death by her parents, her husbands Donald F. Laferriere and Arthur M. Halde and her eight siblings, Adrien Cote, Jeanne Fenwick, Rene Cote, Lionel Cote, Viola Bourassa, Ernest Cote, Laura Lee and Anita Cartier.

Babe was a longtime resident of the Londonderry area. She stayed active in St. Thomas Aquinas Church in Derry as she raised her family. She was a wonderful homemaker, and in her younger years, she worked as a factory worker at Klev-Bro Shoe Manufacturing and as a waitress. As a widow and single parent after the death of her first husband, Babe continued to raise her children while running a small business, The Shoe Box. After marrying Arthur and retiring in 1977, they lived in Winter Haven, FL for a number of years until she returned to New Hampshire later in life. Her final years were spent in Winter Haven, close to her two youngest children.

Babe leaves behind a legacy of faith in her Lord and love for her family unmatched by many who have walked this earth, and she will be missed by all. A Mass of Christian Burial will be celebrated for Babe at St. Thomas Aquinas Church, 26 Crystal Avenue, Derry on Monday July 13th at 11:00 am. The Mass will be live streamed through St. Thomas Aquinas Church media. She will be laid to rest in Holy Cross Cemetery next to her beloved first husband. Due to State of NH guidelines, all guests are required to wear masks and encouraged to social distance.