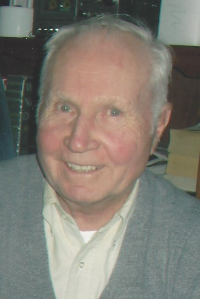 LEICESTER__Titus J. Strakosz, 93, of Leicester died peacefully at home on December 15, 2019. He was born in Worcester the son of the late Jan and Antonina (Szlachetka) Strakosz. Titus is survived by his companion of many years, Susan Johnson of Leicester. He is also survived by a sister, Grace Mangaudis of Worcester and; many nieces and nephews. He was predeceased by two brothers, Adam Strakose and Wesley Strakosz and three sisters, Genevieve Kaminski, Cecilia Luszczynksi and Hele Toloczko.
Titus was raised and educated in Worcester. He served in the US Navy during World War II and then later served in the US Coast Guard and the Air Force Reserve. Titus worked as a carpenter for the City of Worcester parks department for 33 years. he also was president of the Worcester Racing Pigeon Club, a member of the Tin Can Sailors Club, the Frohsinn Club, Greendale Men’s Retirement Club and the American Legion. He was an avid polka dancer. He lived in Sutton for many years prior to moving to Leicester several years ago.
A private committal serv ice was held at Worcester County Memorial Park, Paxton. Donations in his memory may be made to St. Jude’s Children’s Hospital, P.O. Box 50, Memphis TN 3810. HENRY-DIRSA FUNERAL HOME, 33 Ward St., Worcester assisted the family with arrangements.