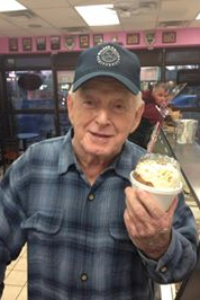 Richard F. “Red” Carroll, age 84, of Canton passed away December 19th at the Norwood Hospital. Born and raised in Charlestown he was a proud Army Veteran of the Korean War. He worked as a Truck Driver for Local 379 in Boston for many years before retiring. After retiring he worked as a maintenance man for Bay State School of Technology in Canton. Red was a Friend of Bill for 48 years and is responsible for starting and running numerous meetings including: the Saturday morning at St. Gerard’s Church in Canton for the last 45 years, the Saturday night at the New England Sinai Hospital in Stoughton for the past 25 years and also the noontime meeting at the Trailside Museum in Milton. Red was a beloved member of the AA community helping hundreds of people over the years with their quest for sobriety.
Beloved father of Michael Carroll of FL, Shawn Carroll of Norton and the late Richard F. Carroll, Jr. and Mark Carroll. Brother of the late Nancy Kelly, John, Patricia and Dave Carroll. Also survived by 7 grandchildren and 4 great grandchildren. Visiting hours at the Dockray & Thomas Funeral Home 455 Washington St. Canton Friday from 3-7 pm. The visitation will conclude with an AA meeting at 7 pm. Funeral Mass at St. Gerard Majella Church, Canton Saturday morning at 10. An AA meeting will follow the mass in the lower church hall. Burial private. In lieu of flowers, donations may be made in Red’s memory to the Canton Veteran’s Service department 801 Washington St. Canton, MA 02021 or to Father Bill’s Place 38 Broad St. Quincy, MA 02021.