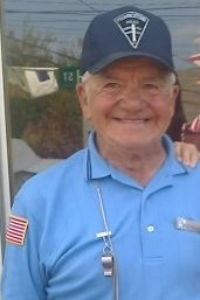 
Donald John Thomas, the Provincetown legend known best as the Dancing Cop, died peacefully in his favorite chair at home in Eastham on the morning of Saturday, December 7. He was 92 years old.

He was born the third of five children on 8 Freeman Street in Provincetown on September 29, 1927 to Ethel (Mitchell) and Anthony Thomas Sr. As a child, he developed a love of music and played percussion instruments including the washboard, spoons, and drums in several bands with his friends. He also had a love for dance, especially the jitterbug, which was popular in his youth.

At the age of 16, he quit school to fish with his father and brother, Tony, on the Richard & Arnold—a boat that meant very much to him. He also fished on the Jenny B, Shirley & Roland, and Charlotte G, among others. Although Donald suffered from seasickness, he continued to fish for 35 years due to his devotion to his family.

He served in the National Guard and briefly in the army during World War II, where he “went overseas” to Staten Island as a psychiatric nurse.

Donald married his high school sweetheart, Lenora Santos on October 9, 1947. They took care of the children of family members until the couple had their own children. They loved to “get in the car and go” to visit family in Gloucester and Western Massachusetts, and to go on shopping trips off-Cape with friends, to eat, and sometimes just to get a cup of coffee outside of town.

With his brother Tony as Santa, Donald would dress as Clarabelle the Clown from the TV show Howdy Doody. Together they would visit the houses of family and friends to hand out presents bring joy to the many children in town. The fraternal duo also helped to bring the idea of the Blessing of the Fleet to Provincetown after participating in similar celebrations while visiting family during summers in Gloucester. They also helped to keep the event going when the fishing industry fell on hard times and interest in the festival was waning.

In the late 1940s, with the insistence from the Chief of Police, Francis “Cheney” Marshall, he and his brother Tony joined the Auxiliary Police of Provincetown—a group of special police who were unpaid. Chief Marshall begged him to become a full-time officer, but he refused because of his commitment to his family and his unwillingness to arrest people he knew. After a few years, he began to receive a yearly stipend for his service and eventually in the 1970s was hired on as a summer patrol officer. As a summer police officer, he was often stationed to direct traffic at various intersections in town. He found that he had to be loud and visible, yet polite, in order to do his job effectively. With his British whistle and love of rhythm, he began directing traffic with a unique style that made him the famous Dancing Cop of Provincetown. He was usually assigned to the busiest and most dangerous intersection in town, Lopes Square. He insisted that he was not dancing, but practicing “self-preservation.” He believed in “working man first” when determining who would be getting through the confusing traffic pattern. Tourist would welcome having to wait and would sometimes applaud and shake his hand when he allowed them to “cross over, please”. His commitment to the job lead to him to wear out two or three pairs of shoes a summer. He bought sticker badges with his own money to hand out to children. His gun only contained one bullet in the last chamber.

As a scuba diver, Donald was on the Provincetown emergency dive team for many years saving lives, rescuing fishing vessels, and recovering bodies. He often did this with great risk to his own life and sometimes for little or no money.

He started riding a motorcycle at the age of 55 and joined the Blue Knights. He would ride around with each of his grandchildren blasting hit music. He had a motorcycle into his late 70s.

In his later years, he enjoyed teaching and joking with his great-grandchildren. He could often be found sitting on his porch in all types of weather feeding birds, taking trips to dollar stores, and visiting family. He watched reruns of Match Game, The Lone Ranger, and was especially fond of M*A*S*H. He also became a New England Patriots fan. He studied medical books and was always looking for ways to cure his own and his family’s ailments. Nightly, he would call his son and give him the name of a classic Hollywood performer and they would discuss the life of the artist at length. He was working on a scrap book to be shared with family and friends upon his death, which will be shared during his memorial services. He also made a special scrapbook for his great-granddaughter, who was his pride and joy. He continued to enjoy music until his last moments. A few hours before he passed, his daughter found him singing and dancing to big band music.

Donald was a fisherman, drummer, motorcycle enthusiast, folk artist, diver, clown, teacher, CDL truck driver, assistant harbor master, security guard, kitchen janitor, overall hard worker, and the Dancing Cop; but more than anything, he was a loving and devoted family man who was exceedingly generous to a fault and down-right stubborn.

In lieu of flowers, please consider donating to help pay for his memorial services and a memorial bench in Lopes Square by searching “Dancing Cop” at www.gofundme.com.