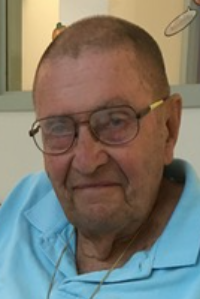 Walter was born on June 18, 1921 in New York, NY the son of George and Emma Borchert. Walter enlisted in the United States Navy in 1939 and was a survivor of the attack on Pearl Harbor on December 7, 1941. Following his military service he married Gloria Jordan in 1946, to whom he was married for 71 years, until her death in 2017. He went on to work as a site engineer for the City of New York and retired to Meredith, New Hampshire in 1977 and later moved to Briarcrest Estates.

Walter maintained a very large garden on their property and loved to tend to all his vegetables and plantings. He was very active in the Community Action Program and enjoyed visiting with those to whom he delivered food. He kept active not only with his garden and community service but also with his love for carpentry and building.

Walter and Gloria were founding members of Good Shepherd Lutheran Church in Laconia and remained active until their health declined.

Walter was recently recognized at the Pearl Harbor Remembrance Day ceremonies at the Home.

Walter is survived by his son, Richard Borchert and his wife, Joan. There will be no calling hours.

Burial will take place at Calverton National Cemetery in New York at a later date.