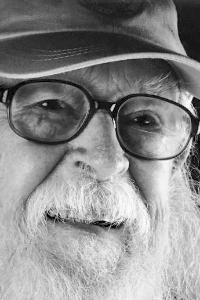 Born November 24, 1928 in Berlin, Wisconsin, he was the son of Bernard and Mary (Butler) Bednarek. He was raised on a dairy farm in central Wisconsin. Robert was proud of his rural upbringing and his education from local schools including a one room school house in Green Lake County and later Berlin High School.

In 1946 he joined the U.S. Army and was stationed in Japan. He served our country while preforming his duties at the Far East Command in Tokyo primarily by typing copies of investigation reports and legal files of war crime evidence. Robert later mentioned he worked for a General because unlike most others they told him he listened well and typed quickly. While in Japan he became interested in their architecture which pointed him in that direction professionally. After his Honorable Discharge from the US Army he formally pursued his interest in architecture by attending Ripon College in Wisconsin. After his initial undergraduate studies at Ripon he participated in an exchange program with the Massachusetts Institute of Technology. At MIT he continued his studies of drafting, design and architecture and after completing his formal education he worked on numerous residential and commercial design projects from his office in Cambridge and later Truro.

In 1957 Robert moved to Truro, with his partner Dr. Charles Davidson where he lived until his death. He loved the "backshore" of the Cape with its unforested hills covered with bearberry and its salt marshes. Until a few years ago he rode his bicycle or hiked to the shore every day, combing the sands for treasures, always with binoculars around his neck. He was an avid bird watcher, naturalist, preservationist, collector of local history and a common sight beachcombing the sands and surf.

Robert was a long-time member of the Truro Conservation Trust where he held positions as Secretary and Trustee Emeritus. He enjoyed the services and company of the Truro Council on Aging Senior Center, attended the Christian Union Church and was a member of the First Congregational Parish, established in 1709, both in Truro.

Robert's comment about his beloved community was that "In Truro people go off in little houses in the woods and come out when they feel like it. That was the attraction for writers, artists, theater people between jobs - they could be alone and not be bothered."

A kind, proud, observant, knowledgeable man, "Uncle Bobby" will be terribly missed by his nieces and nephews; Amy Stocklein, Brian (Jamie) Bednarek of Custer WI, Andrew (Amy) Bednarek of Rancho Palos Verdes CA, Mira (Dain) Trafton of Livingston MT and Jonas (Carrie) Bednarek of Verona WI and their families. He was preceded by his partner Dr. Charles Davidson of Truro, his brother Donald Bednarek of Madison WI, and his parents.

Family and friends will be invited to a celebration of Bobby’s life in the spring, at a time and date to be announced.