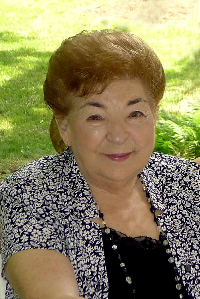 Angelina R. (Marranzini) Fontana, age 94, a longtime resident of Stoneham, passed away peacefully on December 15, 2019. She was the beloved wife of Edward V. Fontana.

Born in Mansfield, MA, she was raised and educated in the West End of Boston. She worked for many years as a seamstress at the Carver Dress Company on Kneeland St. in Boston. She was introduced to Edward Fontana at a dinner party at her sister Theresa Sarno’s house and he became the love of her life. They were married three months later, at a wedding with over 500 guests, and they remained faithfully married for 69 years.

Angelina left employment at the dress company when they moved to Stoneham. Family was her heart and soul, she continued to care for her mother and she raised two daughters. Sunday dinners were always a party with family and everyone loved her baking especially her pizzelles. She worked as a hostess at Primo’s Restaurant in Woburn for over 25 years and made lasting friendships with the people she met there.

In addition to her husband, Edward, Angelina leaves behind her two daughters: Carol Fontana of Stoneham, and Linda Scioli and her late husband Bobby of Reading, her grand/great-grandchildren: Dan Dillon and wife Jennifer of Seattle, WA, their children Dexter and Angelina, and Theresa Dillon of Albany, NY, and Gina Brett and husband Cory, their son Milo of Reading. She is further survived by her loving nephews: Arthur Sarno and his wife Phoebe of Dana Point, CA, Jerry Sarno and his wife Diane of Westford, Eddie Sarno and his wife Joanne of North Reading, and many great-nieces and nephews.

A Funeral Mass will be held on Monday, December 23 rd at 10 AM at St. Patrick’s Church, 71 Central St., Stoneham. Relatives and friends are kindly invited to attend and are asked to meet directly at the church. Burial is private. In lieu of flowers, donations in her memory may be made to St. Jude Children’s Research Hospital, 501 St. Jude Place, Memphis, TN 38105-9959.