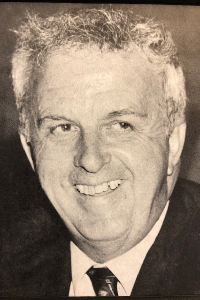 LEE, Thomas E. Age 85 of Bellingham formerly of Wellesley, died Saturday, December 14, 2019 after a brave fight against ALS. He is survived by his beloved wife of 62 years Janet (Gallerani) Lee.

Thomas was born on October 16, 1934 in Waltham to the late Thomas and Julia Anastasia (Riley) Lee and was raised in Wellesley. After graduating from Wellesley High School in 1952, he enlisted in the United States Marine Corps proudly serving his country on board the USS Montrose to Nagasaki, Japan, on the USS Sandoval to Kobe, Japan. In 1954 and 1955 serving in Seoul, Korea. He was on board the USS Wasp en route to Pearl Harbor, HI where he stayed until the end of his service as a Sergeant and Aircraft Mechanic.

Upon his discharge, he enrolled in Babson College and became an Engineer for the Town of Wellesley. Tom then served 37 years as the Executive to the Board of Selectman at the Wellesley Town Hall. He was the President of the Massachusetts Municipal Management Association from 1977 to 1978. He was the Grand Marshal in the Wellesley Parade in 1994.

Upon his retirement for his dedicated service to the Town of Wellesley he had a field named in his honor “Lee Field” (a.k.a. Lee Diamond) on Washington Street. Tom had a great sense of humor and was always excited to show you his field.

He was a member of the Italo American Educational Club in Wellesley, Wellesley Kiwanis Club, and the Italian American War Veterans Club in Milford. He was an Irishman who loved playing Bocce. He was an avid sports fan who loved his New England Patriots, Boston Red Sox, and Boston Bruins.