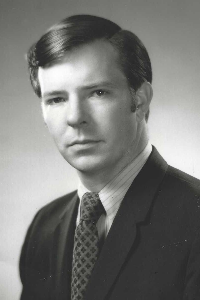 ANGLAND Robert “Bob” Maurice beloved husband, father and grandfather of Palm City, FL., formerly of Dover, unexpectedly passed away on December 7th, he was 75 years of age. Bob is survived by his wife Justine, of 55 years, his two sons Paul and Gregory, their wives Hazel and Kit of Mansfield, MA and his four grandsons, Connor, Aidan, Miles and Trevor.

Son of the late Maurice J. Angland, Jr. and Gladys Pynn Angland of West Roxbury, MA. He attended Boston English High School, Bentley College and graduated from Leslie College with a B.S. in Business Administration. Bob started his illustrious career as a repo man at Shawmut Bank, and continued to progress ultimately as a Vice President in the trust division of the bank. He and his family later moved to Fairfield, CT, where Bob was a Senior Vice President in the pension investments group at Equitable in New York.

His career then led he and his family back to Boston, where he joined Cabot, Cabot and Forbes. He subsequently went on to create a new entity, Cabot Partners, where he served as President and Partner. The firm was focused on pension investments within commercial real estate, during that time the family lived in Dover, MA for 17 years.

Upon his retirement in 1998, he and his wife Justine, split their time living between Florida (Singer Island, Hobe Sound, Palm City) and Belgrade, Maine.

Bob was an avid bridge player and teacher for most of his life, becoming a Bronze Life Master and was considered by friends as a “bridge director extraordinaire”. He loved his house in Maine looking over Snow Pond, for nearly 40 years. He also loved his two dogs, playing golf, and traveling with Justine. He volunteered his time throughout his life at various organizations, including church, which he did for many years, as both lector and eucharistic minister. And we can’t forget to mention his love of both the Patriots and Red Sox.

A Funeral Mass will be held at Most Precious Blood Church, 30 Centre St. Dover on Friday, December 20th at 10am. Interment St. Mary’s Cemetery, Needham.

Bob/Dad will be truly missed by his family, friends and all that knew him throughout his life.

In lieu of flowers, donations in his memory can be made to American Diabetes Association https://www.diabetes.org/donate-memorial, Sandhill Cove Foundation, 1500 SW Capri Street, Palm City, FL 34990, https://www.sandhillcove.com/foundation/
or Riverview School on Cape Cod https://riverviewschool.ejoinme.org/donation.