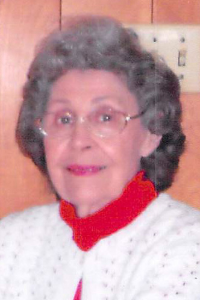 Mary Magdalene Madeline (Duke) Gomersall, 94, of Alfalfa Drive, North Scituate, died Thursday, December 12, 2019 at Overlook Nursing and Rehabilitation Center in Burrillville. She was the widow of Herbert C. Gomersall who died in February, 2004. To her friends in Rhode Island she was known as Madeline.

Born in Butler County, Kentucky, and raised in Louisville, she was a daughter of the late Claude and Minnie Jean (Phelps) Duke. Every summer when growing up in Louisville, some of her fondest memories were made while living on her Grandmothers farm in Butler County where she was born. Most recently she had lived in North Scituate before moving to Burrillville.


She loved nature, especially birds, gardening, painting and singing. She loved the Alpacas on her son’s farm. She was a member of Trinity Episcopal Church and the Altar Guild. As a devout Christian she enjoyed talking about and sharing her deep faith.

She is survived by her daughter, Gail McCarthy and her husband, Dennis of Melrose, MA, her son John Gomersall and his wife, Ivy of Mendon, MA, and her grandson: Matthew McCarthy. She was Aunt Mag to her nieces and nephews. She was the mother of the late Kenneth Gomersall.

Her funeral service will be held Tuesday at 11:30 in the Anderson-Winfield Funeral Home, Rt 44 at Greenville Common, Greenville, RI. Private burial will follow. In lieu of flowers donations in her memory may be made to Hope Hospice and Palliative Care, 1085 North Main Street, Providence, RI 02904 or Trinity Episcopal Church, 249 Danielson Pike, North Scituate, RI 02857