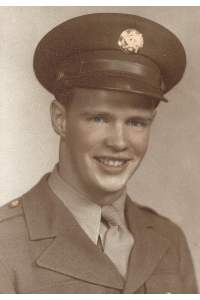 WAYLAND: Ralph Stanley Osmond passed away on Wednesday, December 11, 2019.
He grew up in Watertown and attended college before serving on the front lines of WW2. A Corporal in the tank brigade under General Patton, Ralph was awarded a purple heart and helped to liberate a concentration camp.
Ralph and Grace Marie Caruso, his wife of 73 years, built their life long home in Wayland. A well-known, and esteemed business man, Ralph established a successful custom home building company, starting each day at the crack of dawn and working well into his 80s. Humble, strong, kind and sweet, he was loved by all who knew him but especially by his family.
He is survived by his 4 children and their spouses, David Osmond and Matia Angelou, Robert Osmond and Nam-oi Yinsakulchai, Diane and Walter Soule and Linda and John Rumney, as well as numerous grandchildren and great grandchildren. Ralph adored his wife Grace. They were each other’s magnetic north, enjoying adventures across the globe and spearheading numerous family trips.
He loved boxing, ice hockey and skiing and was a lifelong Patriots fan. Ralph had a special connection to the Red Sox as his father built and managed Fenway Park. Ralph was the type of person who was concerned primarily with the comfort and well-being of others, always putting the needs of his family before his own. Despite protests he was always the last one to serve himself at dinner and grab a helping of his favorite dessert. He died in his home, at 96, with his wife and family he loved by his side.
There will be a private, family service followed by a memorial at Ralph and Grace’s home in Wayland on Sunday, December 15, 2019 from 2:00 to 6:00 pm.
In lieu of flowers donations to the Juvenile Diabetes Research Foundation can be made at www.jdrf.org.