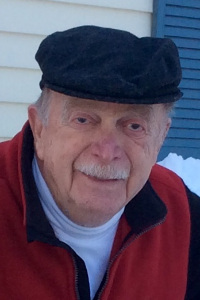 HARWICH - Eklund, Walter S., 88, of Harwich, MA, formerly of Winchester, MA passed peacefully in his home on December 8, 2019 surrounded by his loving family.

He was the beloved husband of Adele Eklund for 28 years.

Born, raised and educated in Woburn, MA, Walter was predeceased by his parents Oscar and Ragnhild Eklund, his first wife Dorothy J. Schumacher and his brother Warren. He is survived by his daughters Ellen Souris of Woburn, and Cindy Hanlon and her husband Michael of Willisburg, KY; his son Kevin Eklund of Ellington, CT; his grandchildren Michelle Kraemer and her husband Erik, Nicole Souris, Erica Souris, Sean Hanlon and his wife Sandi, Jessica Hanlon, Harrison Eklund, Ava Eklund; great grandchildren Connor, George, Max, and Eva; brother-in-law of Marcia Roberts and her husband Leonard; and several nieces and nephews.

Walter served in the U.S. Air Force during the Korean Conflict as Radio Operator and Cryptanalysis and was honorably discharged with the rank of Airman First Class in 1952. He received Expert medal on the 45 pistol and Sharp Shooter on the carbine rifle.

Walter was in the residential & commercial building and construction business for over 50 years where he proudly built his first house in Chelmsford at the age of 24.

After retiring Walter focused on building and painting varied items including furniture, cabinets, tables, stools and acrylic paintings. He was forever planning & building his next project in his stately 24’x 25’ barn garage of the Cape Cod home he built in 1980, the gathering point for family, friends and neighbors.

Any time of the day Walter would sit at his piano and play song after song including some of his own work before turning to his harmonica collection for some country and blue grass.
You could find Walter racing around Harwich in his golf cart. He will be deeply missed and forever loved.

A very special thank you to the staff at Broad Reach Hospice & Palliative Care, North Chatham and Liberty Commons of Chatham for all their compassion and care provided, as well as Sandy, Ivana and Bart, who brought joy into his life by encouraging his many talents.

Relatives and friends are invited to attend a Memorial Service on Saturday, December 28, at 11AM at the Lutheran Church of the Redeemer, 60 Forest Park Road, Woburn, MA. Interment will follow in at Wildwood Cemetery, 34 Palmer Road, Winchester, MA.