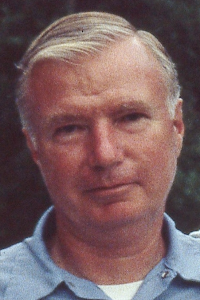 Jack was born, the first of four boys, to James S. O’Callaghan and Helen (Knight) O’Callaghan on August 3, 1933 in Lynn, Massachusetts. He graduated from Marblehead High School in 1951 and Colby College in 1958. He interrupted his college education to serve in the United States Air Force during the Korean conflict. While in the Air Force he was enrolled at Baylor University in Texas. Jack grew up in Marblehead, Massachusetts, and in 1957 the O’Callaghan family moved full time to their Lake Winnipesaukee home next door to the cottage that had been their summer residence since 1942.

There he enjoyed fishing, boating, and water sports on Lake Winnipesaukee. He was a skilled alpine skier whose favorite locations included Tuckerman’s Ravine, Sugarloaf Mountain while at Colby, and ski areas throughout New England. His prowess at card playing was well known and respected. (Yes, he could count cards.) His other activities and interests were bird and deer hunting, painting and drawing, astronomy and photography, combining these last two by expertly photographing the Hale-Bopp comet from his field in Meredith in 1997.

Jack was an avid sports enthusiast. This included Formula One racing, traveling frequently to Watkins Glen, New York; Long Beach, California; and Montreal, Canada. He was also a passionate Boston sports fan of the Red Sox, Patriots and Bruins. After graduating from Colby College, he owned and operated a coffee shop in Stowe, Vermont. When the family-owned business, Tram Diamond Corporation, opened in 1959 in Winnisquam, New Hampshire, Jack joined his father and brothers as a vice president. He traveled internationally with his father to Japan to import mobile citizen band radios from Toshiba and within the United States traveled to trade shows in Nevada, California and Louisiana promoting Tram Diamond base units designed and manufactured at their Winnisquam facility. In the 1970’s Jack, on behalf of Tram Diamond, was instrumental in sponsoring professional race car driver, Randy Lewis, in the Can-Am Racing Circuit. In 1981 Jack and his wife, Nancy, opened a satellite dish/antenna business, Satellink Corporation, in Winnisquam; and later moved the business to route 104 in New Hampton in 1987. In 2004 after 23 successful years, they retired to their home in Meredith, New Hampshire.

His wife Nancy and Jack’s family want to thank the New Hampshire Veterans Home doctors, RN’s, LPN’s, LNA’s and all the staff for their “over the top” compassionate, professional and dedicated long-term care during Jack’s nearly seven years at the Veterans Home.

Private services will be held in the spring at the convenience of the family.

For those who wish, the family suggest that memorial donations may be made in Jack's memory to the charity of your choice.