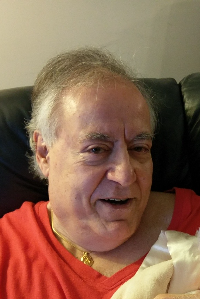 Richard R. Marabella, age 76, of Londonderry, NH, formerly a lifelong resident of Winchester, passed away on December 9, 2019. He was the beloved husband of Linda (Sharp) Marabella.

Born in Winchester, he was the son of the late Antonio and Rose (Marino) Marabella. He was raised and educated in Winchester and graduated from Winchester High School with the class of 1961. After high school, he went to work at the watch factory, and then went on to work for many years at Polaroid, until they closed. He finished his career at M.I.T. where he worked in research at the Broad Institute until his retirement.

In his spare time, Richard loved listening to oldies music. He also loved cooking, especially Italian food, and his family remembered several of his signature dishes, including sausage & peppers. Richard loved the New York Yankees and the Philadelphia Flyers. Most importantly, he loved his family. He adored his grandchildren and playing with his “granddogs”.

In addition to his wife, Linda, Mr. Marabella is survived by his children: Anthony R. Marabella and wife Christina of Chelmsford and Melissa L. Marabella and fiancé Michael Rusak of Londonderry, NH. He was the youngest brother of Jennie Amico of Stoneham, Anne Skopelitis of Londonderry, NH, Mary Price of Mystic, CT, Dominick Marabella of Burlington, VT and the late Grace DelSolio, Elizabeth Karis and Frank Marabella, devoted grandfather of Emily Rae and Richard Anthony Marabella, and is further survived by many nieces and nephews. Relatives and friends are kindly invited to attend Visiting Hours at the Costello Funeral Home, 177 Washington St., Winchester, on Friday, Dec. 13 from 5-8PM and again on Saturday, Dec. 14 at 9AM followed by a Funeral Mass in St. Mary’s Church, 155 Washington St., Winchester at 10AM. Burial will follow in Wildwood Cemetery, Winchester. In lieu of flowers, donations in his memory may be made to the Lewy Body Dementia Association, 912 Killian Hill Rd. S.W., Lilburn, GA 30047. www.lbda.org.