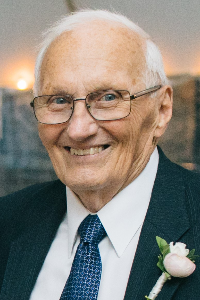 Raymond F. Kelley, of Medway, died peacefully on Thursday, December 5, 2019 at his home surrounded by his family. Ray was the husband of Brenda J. (Bisson) Bosma Kelley.

Born in Framingham, December 15, 1935, the son of the late Raymond T. and Beatrice l. (Rivard) Kelley, Ray was a resident of Medway for most of his life and graduated from St. Mary’s high school in Milford, class of 1953.

Ray proudly served in the USAF Security Services completing an intensive course in the Chinese language at Yale University. He was stationed and served in the Far East for over 2 years and then at the NSA until discharge. He received a Commendation Medal for his service.

Ray worked at General Motors for 34 years, retiring as a general supervisor. He also served on the Medway Fire Department for 14 years during the 60’s and 70’s.

After retirement, he spent many years decorating towns for celebrations and building parade floats for Rojee Decorating. He enjoyed deep-sea fishing, was an avid fan of the Boston sports teams, and regularly attended sporting events for his grand-children, which were very cherished times. His great humor and infectious smile will be missed.

Relatives and friends are invited to attend his funeral at the Ginley Crowley Funeral Home, 3 Barber St. in Medway (www.ginleyfuneralhomes.com) on Wednesday December 11 at 9:15 a.m. followed by a funeral Mass at St. Joseph Church, 151 Village St. in Medway at 10 a.m. Burial will follow at St. Joseph Cemetery.