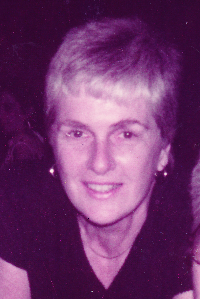 Rockland – Jean M. (Thorpe) O’Donnell 90, a lifelong resident of Rockland, died Friday December 6, at home surrounded by her loved ones after a brief illness. She was the beloved wife of sixty-five years to the late John V. “Thunder Jack” O’Donnell.

Born and raised in Rockland, she was the daughter of the late J. William and Nellie (Delaney) Thorpe, and a graduate of Rockland High, Class of 1947 and Boston’s Chandler School for Women in 1948.

She had worked as a legal secretary for several area law firms and was secretary for the Massasoit Community College Veteran’s Office.

She enjoyed many crafts as well as gardening.

She was the family matriarch and historian, and a blood and bones primary source of stories dating back to the 1800’s, but the delight of her life was being a mother “Mom”, a grandmother “Bammi” and great grandmother “Gigi”.

She was also a lifelong communicant of the Holy Family Church of Rockland.

She is survived by her loving children Brian O’Donnell and his wife Liane of San Rafael, CA, David O’Donnell of Whitman and Lynne Burns of Whitman. She is also survived by her grandchildren Kate, Nolan, Chelsea, Fabio, Clint, Connor, Corey and her great grandson Whitaker as well as many loving nieces and nephews. She was predeceased by her siblings William Thorpe, Doris Smith and Mary Chenevert.

Her services will be held Friday December 13 at 8:15 AM from the Blanchard Funeral Chapel, Plymouth Street (Rte. 58 @ the rotary) Whitman, followed by a funeral Mass at 9:00 AM in Holy Family Church, Rockland. Burial will be at a later date. Visiting hours are on Thursday December 12 from 4:00-7:00 PM.