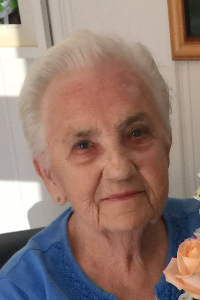 Barbara P. (Collins) Prince, a 19 year resident of Bridgewater and formerly of Randolph and Charlestown, entered into eternal life on Thursday, December 5, 2019 at the Allied Health at Marina Bay Nursing Home in Quincy. She was 89 years of age.

Barbara was born in Boston on June 18, 1930, a daughter of the late James D. Collins and Mary (Foley) Collins. She grew up in Dorchester where she attended St. Margaret's Parochial School and graduated from St. Margaret's High School. Barbara worked as a Secretary for the Commonwealth of Massachusetts Personnel Department for 15 years. Barbara enjoyed line dancing at the senior citizen center in Randolph.

Relatives and friends are invited to attend Barbara's Funeral on Tuesday, December 10, 2019 at 10 A.M. from The Carr Funeral Home, 220 Bunker Hill St. Charlestown followed by her Funeral Mass in St. Francis De Sales Church, 313 Bunker Hill St. Charlestown at 11 A.M. Her burial will be at St. Mary's Cemetery in Randolph. Her visiting hours will be on Monday, December 9, 2019 from 4 to 8 P.M. in the funeral home.

In lieu of flowers, kindly make a memorial donation in Barbara's name to end T1D by visiting the link below or mailing a donation to Juvenile Diabetes Research Foundation, JDRF, 60 Walnut St. Wellesley, Mass. 02481.