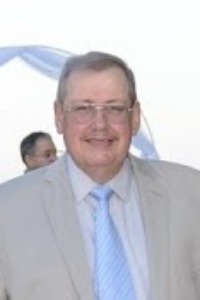 He graduated from University of Massachusetts in Amherst. He worked for W. W. Graingers, Data General and Factory Mutual as a computer programmer/analyst. He was one of the first users of America Online and created the Genealogy Forum on AOL making it one of the top 3 forums on the service.

He was on the board of directors of the Santa Foundation and was the head Santa Claus for many years.

He was a veteran of the US Army serving with the 101st Airborne in Vietnam and earning a Bronze Star and Army Commendation medal. He was active as a Vietnam Veteran Against the War after he returned. He has been a member of the American Legion Post 75. His cancer was likely caused by exposure to Agent Orange during his service.

He was an active member of the Franklin United Methodist Church.

Relatives and friends are invited to attend his funeral service Saturday Dec. 7th, in the Franklin United Methodist Church, 82 West Central Street, at 10AM.

Interment with military honors will follow at Union Street Cemetery.

In lieu of flowers, donations in his memory may be sent to the Franklin United Methodist Church Maintenance Fund.