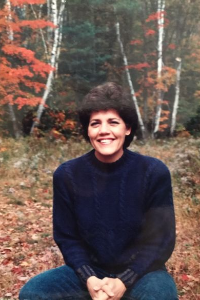 JOANNE KATHLEEN (PIMENTEL) GARLOCK, of Bluffton, South Carolina, died suddenly on Thursday, October 31, 2019. She was 62 years old. She was the loving wife for 32 years to the late Paul Douglas Garlock, firefighter and United States Air Force veteran. She was also predeceased by her father, Leon L. Pimentel, and her brother, John E. Pimentel.

Joanne was a 1975 graduate of Winthrop High School, and she attended the Community College of the Air Force and Boston State College. She took great pride in her 20-year service to our country in the United States Air Force, from 1976 until 1997, and where she served as a logistics war planner during Operations Desert Storm and Desert Shield. She attained the rank of master sergeant and retired to Bluffton, South Carolina, then worked as a bookseller for Barnes & Noble on Hilton Head Island, South Carolina and volunteered for Coastal Carolina Hospital in Hardeeville, South Carolina.

Joanne traveled extensively during her Air Force career, stationed all over the United States, Western Europe, and even Asia. Early in her service, stationed at Eglin Air Force Base, near Fort Walton Beach, Florida, she met her husband, Paul, of Buffalo, New York, also an airman at Eglin. They were married in August 1983 and spent the next 32 years as soulmates and fellow adventurers throughout the world. Joanne especially loved England, where she was stationed at RAF Alconbury. She was able to take trips to countries all over Europe from that perch in the UK, to Ireland, Germany, Switzerland and Italy, among others. Her house, filled with beautiful mementos and photo albums, is a testament to those magical times and the people Joanne and Paul met along the way.

Joanne famously loved “summer, sunshine and beaches”; the exuberant colors of fall; the flowers of springtime; really all of the seasons of her beloved New England, and her hometown of Winthrop, Massachusetts, which she ached for when she was far away. Once, when her niece Lauren’s birthday plans were adversely affected by snow, she remarked, “I’m so sorry to hear that, but I’d be dancing in it if I could be with you guys!” Joanne also read voraciously and loved her music, eclectic as it was, from Simon & Garfunkel to Ed Sheeran.

This roster of life experiences would not be complete without underscoring the immense challenges of living with a diagnosis of bipolar disorder. But Joanne was never defined by that condition; indeed, she rode the waves of that illness with strength, courage, and poise. She wove a beautiful dream with Paul in South Carolina’s Lowcountry, living in Bluffton, the next town over from our Mom in Hilton Head. And then she took care of her beloved Paul after a massive September 2007 stroke, nursing him back to good health over many years, and being sole caregiver and nothing less than a superwoman after a pharyngeal cancer diagnosis that ultimately and tragically took her dearly loved Paul from her in May 2015.

We applaud a life lived with such passion and zest, and dedication to integrity, honor and authenticity. We are deeply honored to bring our precious sister back home to Winthrop, with full military honors, and celebrate her life by raising her up on our shoulders and singing her song so the whole world can sing along.

Joanne now joins her soulmate, Paul; her Dad; her big brother, John; and all of her beloved grandparents who have gone home to God before her. We love you, Joanne, and as you said in May, “We have had many trials and tribulations through the years, as we all do, but I am glad to say, because of our unique experiences with both joy and sorrow, we have been blessed with compassion. We all appreciate and have a passion for life. We each have gifts and strengths we can call on in times of need. We have learned, through the years, to be able to lean on each other and are blessed to have numerous supportive friends and extended family. Not a day goes by, when I don’t think of how blessed and grateful I am to be part of the Pimentel family.”

“Happiness is not what makes us grateful. It is gratefulness that makes us happy.” —Brother David Steinem-Rast.

Visitation will be from the Maurice W. Kirby Funeral Home 210 Winthrop St. Winthrop, on Saturday, December 21, from 9-10AM, followed by a Funeral Service in the funeral home beginning at 10AM. Relatives and friends are invited. Interment will follow in Winthrop Cemetery. In lieu of flowers, donations can be made to: Rogue Rescue and Sanctuary, PO Box 1643, Bluffton, South Carolina, 29910 www.roguerescue.org 843-816-0097, or your favorite animal shelter.