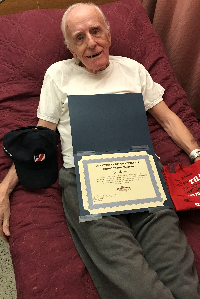 Roy W. Mosher, 86, of Abington, formerly of Whitman, passed away on November 30th in the Colony Center for Health & Rehabilitation. He was the husband of Eleanor (Simmons) Mosher.

He was born in Brockton, son of the late Frederick l. and Marion (Ellis) Mosher.

Roy served in the United States Air Force during the Korean War from 1952-1956. He worked as Quality Control manager for Etonic Shoe Company for many years. Roy also worked at South Ave TV in Whitman and built his own TV.

He was an avid sports fan of the Patriots and the Red Sox.

In addition to his wife Eleanor, he is survived by is children Karen Mosher of Whitman, Kevin Mosher and his partner Dottie of Weymouth, Ashlee and Danny Chamberlain of Brockton and 2 grandchildren Tony and Jayden of Brockton, also several nieces and nephews. He was also the brother of the late Sybil Maloney, June Gurney, Willeta Mahoney, and Gary Mosher.

His service will be held on Friday December 6th at 11:00AM in the Blanchard Funeral Chapel, Plymouth St. (Rte. 58 at the rotary circle) Whitman. Interment will be in Colebrook Cemetery, Whitman. Visitation will be one hour prior to service from 10:00-11:00AM.