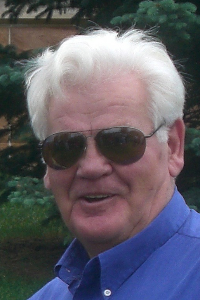 On November 21, 2019, George Henry Noyes passed away peacefully at home surrounded by his loving family. A prominent local figure well known for his trademark handshake, George could be found daily with his friends at King Street Café in Franklin, MA.

George was born on a working farm in Piermont, New Hampshire in 1934. He graduated from Bradford Academy, Bradford, Vermont and, as the school baseball star, was invited to try out for the Boston Red Sox. He later moved to and raised his family in Franklin, Massachusetts and with his boys was involved in Franklin Charger football.

George was a cheese maker for Garelick Farms, a teamster delivering food for Hill Food Service and, drove generations of Franklin school children to school, field trips and sporting events. Together with his wife, he resided at Riverend Farm, a historic Norfolk home built in 1681. George was a devoted Patriots fan, who loved to help others, showing up to plow snow, chop down a tree, or do some heavy lifting. Above all else George loved to go “up North” to fish with his boys.

George was predeceased by 3 brothers, Bertram Keniston, Hugh Keniston and Roger Noyes and four of his children; Gail and Jonathan Noyes, who died in a tragic Franklin house fire in 1973, Kathy Wilson, and MaryJane Noyes; and grandson Jonathan Barrieau. He is survived by his beloved wife of 42 years Camilla of Norfolk, MA, and their son Christopher Noyes, his wife Jessica of Wrentham, MA and their children, Cayleigh, her husband Anthony John Harris Jr. and their daughter Riley, Camryn, Hannah and Landyn; his sister Henrietta Aldrich and her husband Ken of St Johnsbury, VT; his children with the late Bette Noyes: Vicki Generazio and her husband Michael of Framingham, MA; George Henry ‘Skipper’ Noyes of Dover, NH; Holly Barrieau of Easton, ME; Tommy Noyes and his wife Nicki of Greenland, NH; Michael Noyes and his wife Julie of York, ME; Bruce Noyes of Portsmouth, NH, and Paul Noyes of Michigan; his stepdaughters Shawn Kenner and her husband Craig of Franklin, MA; Tracy Briata, her husband Raimondo and their children Jesse, Noah, and Summer of Centennial, CO; Camilla Chaplick, her husband Scott, and their children Jackson and Abigale of Centennial, CO; his grandchildren Jimmy Wilson, Christine Barrieau, Jillian Priester, Morgan Hickman-Noyes, Courtney Hickman-Noyes, Madeline Hickman-Noyes, Andrew Noyes, Crystal Noyes, Abigail Noyes, Allie Noyes, and Nick Noyes; his great grandchildren, nieces, nephews and many many friends.

In lieu of flowers, donations in George’s memory may be made to the Norfolk Animal Control and Shelter,117 Main Street, Norfolk, MA 02056.