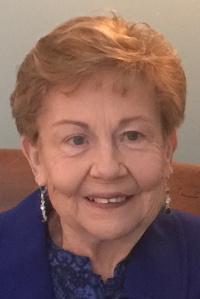 
Janet E. (Conroy) Sands passed away peacefully at home on Sunday morning. She was 82. Raised in Brighton, Janet was the daughter of the late Richard P. and Nora J. (Coughlin) Conroy. Sadly, her mother Nora passed away giving birth to Janet. Two years later, Richard married Agnes who Janet accepted as her mother and Agnes lovingly raised Janet as her daughter. Janet was a loving wife, mother and grandmother who was proud to be a full-time mom to her five children. As her own children grew-up Janet enjoyed a career in customer service with the Charrette Company, providing architectural and drafting supplies. A Medford resident for nearly 40 years, she and her husband Larry enjoyed their retirement together and remained active not only with their grandchildren but with their many friends.


The beloved wife of Lawrence S. Sands, (retired Chief of Medford Fire Dept.), Janet was a devoted mother to Stephen Sands and his wife Dorothy of Medford, Mary Diantgikis and her husband James of Peabody, John Sands and his wife Evelina of Melrose, Julie Russo of South Hamilton, Kevin Sands and his wife Lisa of North Reading. She was a loving grandmother to Alexandra, Olivia, Danielle, Emily, Caleb and Isabella. She also leaves many dear nieces and nephews.

Janet’s funeral will be from the Dello Russo Funeral Home, 306 Main St., Medford, Friday, November 22nd at 10:30 AM followed by a funeral mass celebrated in St. Francis of Assisi Church, 441 Fellsway West, Medford, at 11:30 AM. Services will conclude with burial at Oak Grove Cemetery, Medford. Relatives and friends are respectfully invited to attend and may visit at the funeral home on Thursday from 4 to 8 PM.

In lieu of flowers contributions may be made in Janet's name to St. Francis of Assisi Church, 441 Fellsway West, Medford, MA 02155 or to the charity of One's choice.