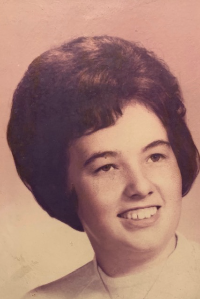 
CORNISH- Carolyn Louise (Adams) Rankin, 68, passed away peacefully on November 16, 2019 at the Gosnell Memorial Hospice House in Scarborough, Maine. She was born on November 15, 1951, in Portland, Maine to Noel Samuel Adams and Carolyn “Lorraine” Weeks. She attended Porter Schools, and later, graduated from Sacopee Valley High School in 1970. She married the love of her life, Glenn Joseph Rankin on August 28, 1971. They had their son, Joseph Glenn Rankin on February 2, 1972.

Carolyn had a love for children. In her earlier years, she had an in- home daycare, which she did for many years. She made a huge impression on her “kids” and was also fortunate to be able to raise her son Joe at home. She also worked as a waitress for Lockes Drug Store in Kezar Falls, and in the late 1980’s started at Vulcan Electric. She worked her way up, managing the assembly department for many years. Later in life, she worked as an in-home caregiver for the elderly in her own hometown.

Carolyn had a love for community and joined Corona Chapter - Order of the Eastern Star in Cornish. where she became a Worthy Matron five times. After the Chapter closed, she became a member of Bridgton; Pondicherry Chapter 192.

Carolyn also had great involvement in supporting her grandchildren. She helped start a Girl Scout Troop and was known as “Miss Muffy”. She also attended every sporting event that her granddaughters were involved in including 4-H cow and horse shows. She never did miss an event and was her girls biggest supporter.

Carolyn’s faith and perseverance were felt in every room she walked through; her love for life, her smile so big. She overcame battles that most would not know how to overcome. She never once gave into her sickness of cancer. She never admitted to fear, and always would let you know that she was “just fine”. She showed everyone who knew her, that “mind over matter” does exist, if you just believe, and she did believe with her whole heart.

In Lieu of flowers, we know she would love donations to go to the Orchard Community Church, 1 North Street Gorham, ME 04038 or to the Cumberland County All-Star Dairy 4-H Club, C/O Connie Wood, 85 West Road, Parsonsfield, ME 04047.

Visitation will be held on Saturday Nov. 23 from 5-6 PM, followed by a 6 PM funeral at the Poitras, Neal & York Funeral Home, 71 Maple St., Cornish. Online condolence messages can be submitted at www.mainefuneral.com