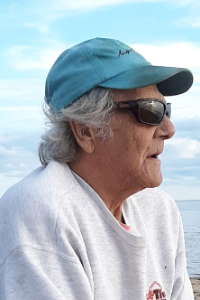 
Richard David Salvador, Sr., 73, of Provincetown died unexpectedly Monday, November 11th at Cape Cod Hospital in Hyannis, surrounded by his loving family. The community is mourning the sudden loss of one of its finest and most respected Commercial Fisherman. He was the lifetime partner and best friend of Sandy Woodfin.

Born in Provincetown, son of the late Ferdinand and Philomena (Cordeiro) Salvador, Richard followed in his father Freddy’s footsteps and at the age of fourteen, pursued his lifetime career of commercial fishing. It was a time of wooden boats and men of steel! Richard fished with his dad for many years on the F/V Michael Ann before purchasing his own boat, the F/V Josephine G. From an early age, he was known to be a master at making and repairing fishing nets.

In 1984 he moved to Freetown and fished out of Fairhaven with his lifelong friend Capt. Joe Francis of Wellfleet on the F/V Lark and F/V Nauset. He also fished with Capt. Allen Sherman of the F/V Curlew II out of New Bedford and Boston. He became one of the most liked and respected fishermen in the fleet.

Missing Provincetown, he moved back in 1998 and fished until he retired in 2010, after spending 52 years on the high seas.

In addition to Sandy, he is survived by sons Richard Salvador Jr. and wife Brandy, Danny Salvador and girlfriend Molly Fitzpatrick, Geoff Lemos and a daughter, Marisa Felton and her husband George. He also leaves granddaughters Natalie and Brook Salvador, as well as numerous nieces, nephews, cousins and good friends. He was predeceased by his son Eric, by brothers Michael Salvador and Anthony ‘Junior’ Leonard, and sisters Carol Salvador Silva and Veronica Leonard Silva.

Family and friends are invited to a Celebration of Richard’s Life at 2:00 pm, Sunday, December 8th at the Governor Bradford Restaurant, 312 Commercial St, Provincetown.

Donations in Richard’s name may be made to the Silva Ataxia Foundation, c/o BY&D Insurance, 56 Howland Street, Provincetown, MA 02657.